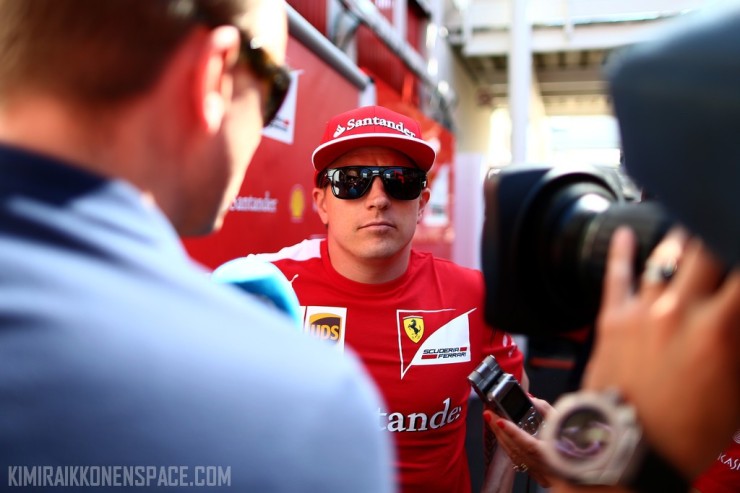 Much better understanding of the car now

Kimi Raikkonen had the honour of being the first driver to hold a media session in Scuderia Ferrari’s newly refurbished Media unit at the Catalunya circuit, as this weekend marks the first appearance of the season for the trucks and hospitality units, with the F1 calendar finally reaching Europe.

However, even if we are in Spain, the Finn’s first question involved looking back to the tough weekend in Shanghai. “We have had a difficult start to the season, so we need to get things on track and fix that situation,” admitted Kimi. “It’s not an easy task, but I’m sure we can do much better. In China there were a lot of small things that influenced the final result and we would have understood the problems sooner if I had managed to take part in first practice. That made the rest of the weekend difficult. But we know what happened. So far, this year has not been very straightforward but I am hopeful we can turn it round. I am sure we will get there, the question is when. Hopefully soon.”

With Mercedes having won all four races so far, a common question the length of the paddock today was, are they uncatchable in the title race. The Ferrari man isn’t sure. “We have been working hard and we have improved the car at every race and even a small thing can make a big difference to something like the handling for example,” said Kimi. “We have a much better understanding of our car now, but the others are still pushing to improve too. Hopefully at some races soon we will be able to fight with them.”

Raikkonen confident in turning things around

“I’m sure we can improve,” he said. “It’s been a very difficult start so far, but I mean we know most of the reasons, and now it’s just a question to get things the right way and fix them. It’s as simple as that. It sounds very easy, but sometimes it’s difficult to make it. I’m sure we can do much better than we’ve done.”

Raikkonen said a combination of factors led to his frustrating race in China, where he finished eighth, five places behind his team mate.

“I think there was a lot of small things that obviously influenced a lot what happened in the end. I think we could have understood the things much better if we had done the first practice, but then obviously it was wet and it just got difficult because of that. It’s an excuse but that’s how it went, it didn’t work out very well. We got a few points, but not a very good result still.

“I think we know what happened. We would not like to have those weekends, but unfortunately it hasn’t been very straightforward this year. Hopefully we can turn it around and be where we should be. I have no doubt that will will get there, and hopefully soon.”

Asked about the prospects of catching Mercedes he said: “I don’t know. Obviously we try to do the best that we can to improve the car. Every race we improve things, even if it’s a small thing it can make a big difference on handling and stuff like that. The fact is that when you are behind it’s hard to catch up because the others will not stop working, they keep pushing, and they will improve. Certain things that we know we have to improve, it’s not easy to change. We will keep working and try to improve and hopefully at certain points, certain races, we will be able to challenge them.”

1 thought on “Thursday in Barcelona”