This fan-site is in no way directly involved with Kimi Raikkonen, his management or race team. KRS is an independent website dedicated to the driver with the sole purpose of providing a place of all news to his fans. Stories, articles and reports always state their sources. All thoughts and opinions expressed by the editor (Evenstar) do not respresent Kimi, except for his official columns and press release comments which are shared onto the blog. 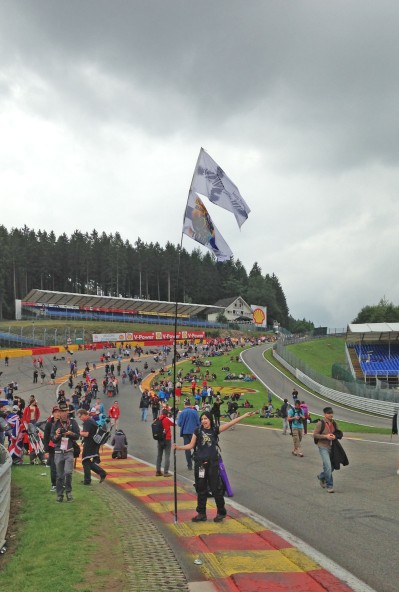 Kimi Raikkonen Space was created by a fan called Saima, her online alias being Evenstar. Since the blog began in 2005, KRS aimed to provide for all Kimi fans interested in the latest news about his career, along with other miscellany such as wallpapers, interviews, videos and tributes. The most anti-cipated feature on the site were the Grand Prix highlight videos from 2007-2009 which were made specifically for Kimi fans and uploaded after every race. This fan-site also held the biggest photo archive of Kimi (on Skydrive which has now changed to OneDrive, unfortunately losing it’s public availability settings.) KRS includes other information and statistics that are updated consistently throughout a season (we try!) .

In her 16 years of support for the enigmatic Finnish driver dubbed ‘Iceman’, Evenstar was voted The Biggest Kimi fan on the Official Kimi Raikkonen Forum in 2005 and 2007. The popular F1Fanatic website also shared similar sentiments. Since Evenstar began watching Formula One from around 1997-1999, her passion for the sport and for her favourite driver grew. She found writing the best form of expressing this through race reports and articles on Kimi’s career. Deciding to put them to use here and share them with fans all over the world, Evenstar combined her Journalism studies and her love for F1 by blogging/writing articles on Kimi’s performances and general F1 stories. The race reviews stopped after Kimi took a sabbatical from F1.

Evenstar has a passion for video editing and produced her very own F1 season highlight videos and tributes, some reaching over a thousand downloads each. During the middle of 2008 however, the videos took a hiatus due to other personal and important demands. In 2009 Evenstar continued to document Kimi’s Ferrari career till the end before he left F1.

Design has also been a long time passion of Evenstar, using Photoshop. This led to producing a Kimi fan shop which had a successful start in 2008 with the only Kimi calendar designed and created especially for fans being delivered all over the world in USA, Australia, Europe and parts of Asia. The trend continued with the 2009 Limited Edition calendar, where only 50 were produced and all had been sold out. Evenstar later designed a career special 2014 calendar, where only 100 were made. During the official opening of the Ferrari Store in London on 6th May 2009, Evenstar received Kimi Raikkonen’s autograph on her 2009 calendar and managed to pass a DVD by hand to Kimi personally, which contained her F1 tribute videos on his career (you can watch and read all about that crazy encounter here).

In 2012, Kimi’s popularity shot to new heights with a successful F1 comeback while remaining the same old funny guy; and due to high demand, Evenstar begun merchandising more clothes and posters online with popular Kimi phrases and designs, such as “Just Leave Me Alone, I Know What To Do!”

Gallery of Evenstar’s visit to the 2015 Abu Dhabi GP – where she finally got a photograph with her hero! 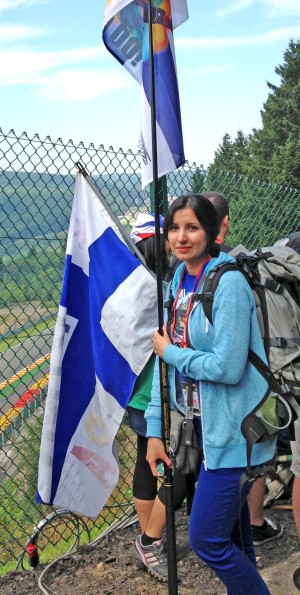 It was announced in the late evening of 17th November 2009 that Kimi would take a sabbatical from F1 in 2010. However, in 2010 the Iceman decided to participate in the World Rally Championship for the first time, with Citroen and Finnish co-driver Kaj Lindstrom, after their new deal was announced on 4th December 2009.

Due to personal reasons the website ended in August 2010. But most importantly, KRS remained online to serve as an archive and the place of great memories that the fans have shared together in admiration for our favourite racing driver. Kimi on the other hand, rather than having a ‘holiday’ as most assume, kept himself occupied and fresh with motors nonetheless…

He continued rallying into 2010 and 2011, also setting up his own motocross racing team named after the Citroen-based rally team Ice1 Racing. With rallying looking like more of a challenging long-term commitment, Kimi decided to try his hand at other forms of motorsport while he could and subsquently headed to the United States for a couple of Nascar races in mid-2011.

The Iceman Returns… And So Does KRS!

After much speculation and reports of an F1 comeback with Williams F1 team, the deal fell through and Kimi and his management were approached by Lotus Renault (Gerard Lopez and Eric Boullier). On the 29th November 2011, Kimi’s long awaited return to Formula 1 was announced with Lotus Renault GP, confirming Kimi as their driver for 2012 alongside Romain Grosjean in a two-year contract.

KRS was instantly revived with Kimi’s return and reached more fans than ever; the website received over 855,827 views in 2012 alone, the busiest day being Kimi’s win at the Abu Dhabi GP.

The edited videos also made a comeback in 2012 and 2013, a three-part tribute entitled ‘The Iceman Returns‘. The Prelude is the most popular first-part video; it portrays the wished comeback of Kimi in a dream-like vision, covering Kimi’s departure from F1 into the WRC and Nascar but leading back to his legacy in F1 – which holds his true passion for racing.

As of September 2015, KRS took a break after Evenstar decided to protest against Ferrari’s treatment of Kimi. However KRS maintained following Kimi’s career with fans on social media. She continued to passionately support Kimi by attending F1 events and Grands Prix. Here are her flags which were snapped at the F1 Live London event by official Ferrari photographer Callo Albanese. 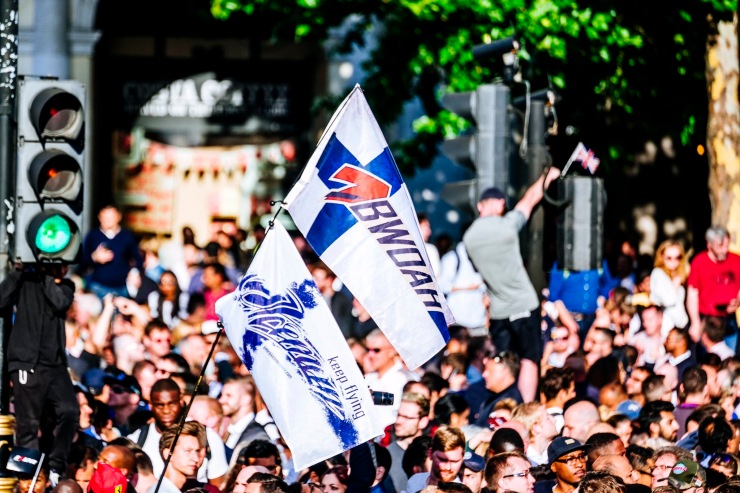 After Kimi was confirmed to be continuing F1 with Alfa Romeo/Sauber for at least two more years once leaving Scuderia Ferrari at end of the 2018 season, Evenstar decided that she may blog again.

Gallery of Evenstar’s visit to the 2017 Italian Grand Prix

Here are some comments from readers since the early years when KimiRaikkonenSpace.com was Darkmaiden.Spaces.Live.com – thanks for the support guys!

Shadman wrote: “Hi Saima, you are truly the purest and best Kimi Raikkonen fan I have ever known…. I’m sure my fascination for Kimi’s “inspirational, new-age cool style personified” F1 skills is exactly the way as yours, however, you’ve actually taken the time and effort for this really wonderful website and I can see you’ve put in a tonne of hard work into creating and maintaining it – HATS OFF to you!!!!!!! I hope to meet you someday and express my appreciation for your efforts.”

Shanti wrote: “Hi Saima. Been visiting for a long time, finally got myself logged on, so I could say thanks. I can see, how much work and effort you are putting into this. Believe me, it is appreciated. You are always my first choice for good info about Kimi. Have a great time on Silverstone and cheer for us all. Love Shanti.”

Maria Eugenia wrote: “Hi Saima…let me tell you this is the best site I’ve ever visited from a Kimi fan…..you’ve been doing it just great!!!!! I visit it now and then….and your highlight videos are the best…I’ve already downloaded some of them…..keep your job as good as always….see you..”

Matt Hughes wrote: “This site is proper good. Also nice to see you having something to practice your journalism on, as that’s the way to stay sharp. Looking forward to being a fellow staff member of yours at Autosport in 2009!”

Juan Carlos wrote: “Great test for Kimi at Spa! Excellent videos Saima! Thanks for doing this, it means a lot!”

F1_Maniac wrote: “I just wanted to personally thank you so much Evenstar.. You’re the sweetest, I’m a huge Kimi and now Evenstar fan from the US (where we don’t get much of anything on F1 except the race). I watched all your videos over and over again, the way you edit the images and video clips of Kimi together along with the right music is just phenomenal. And the way that you almost tell the story of the Grand Prix weekends from preparations to the podium celebration is so accurate. Once again, thank you so much and what a season to finish with the Iceman on the top. Great year from Kimi and you. Thanks.”

Sipio wrote: “I keep watching the ‘Brazil 2007 – Kimi World Champion’ video over and over because it’s so beautiful. I so love it with the music when they lower Kimi’s car in the pitbox to go attack, and then in that final lap when Kimi crosses the finish line,you hear a Finnish commentator screaming all that emotion, it’s so awesome and brings tears in my eyes over and over again.”

Aiman wrote: “Kimi no.1! Kimi no. 1! Yeah Yeah Yeah! Thoroughly enjoyed your brave enthusiam for Kimi among Hamilton fans in the video.”

Ionut Bratu wrote: “Superb as usual. Thanks for the clip”.

OldeWalde wrote: “I’m sure Kimi will dedicate his victory to your loyal support next time he visits your dreams! If Ferrari haven’t noticed your wondeful site they are missing out! And if Kimi hasn’t heard about you yet it’s because he holds his friends very close and they protect his privacy so carefully. Thank you for your input through the year. Follow the dream!”

Ági wrote: “Hi Saima! Your site is great! I’m very glad that I’ve found it. Thanks for it! Greetings from Hungary. Go Kimi!”

“Hi Evenstar, I still watch daily your space, there is all what`s useful to know, specially you have not much time to check other sources. Thank you very much!”

“Thank you so much for this site, the best I’ve ever seen about Kimi Raikkonen.”

“Wow, this is an amazing site. In my opinion one of the best pages of a Formula One driver. Love the videos that you make, they are so cool. Because of you, now I’m a Kimi fan. He seems to be a relaxed person who only wants to drive and have fun. Regards from a Colombian fan”