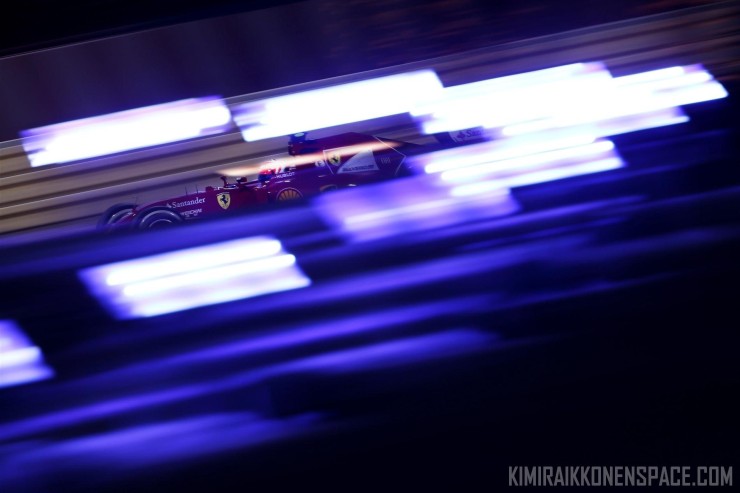 Report: Kimi Raikkonen and Fernando Alonso will start from the third and fifth rows tomorrow night in Sakhir. The Finn struggled in Q1 and Q2, but strung it together to post an encouraging 1.34.368, good enough to go sixth fastest in Q3.

As for the Spaniard, he looked on the pace in the first two session, but did not get the most out of the car in the final part and had to settle for tenth place with aq 1.34.992.

Both drivers will move up one place on the grid, although not actually changing rows, as Ricciardo, third today, takes a ten place penalty from the Malaysian Grand Prix. Pole went to Nico Rosberg, ahead of Mercedes team-mate Lewis Hamilton. The second row will feature Bottas in the Williams and Perez in the Force India.

Kimi Raikkonen: “I am reasonably pleased with my qualifying, because up until this morning, I did not feel completely comfortable in the car, but the faith I put in what we had at our disposal was paid back with this result. We are improving in all areas, on the engine, data acquisition, electronics and the new parts fitted to the car have given me a better feeling from the front end. Sure, we are not yet where we want to be, but I think we are on the right path and we have the right people to give us every possibility to continue to move forward. It’s hard to say how tomorrow’s race will go, because in the simulation done yesterday, I was struggling on the Medium tyre, while the balance was better on the Soft. We know we can’t fight with Mercedes, but today’s result gives me more confidence than at the previous races and I will do my best to bring home a good result.”

Pat Fry: “The results we’ve seen so far here are not a surprise because we knew we would be racing on the defensive and that we would see a bigger gap to the Mercedes, who are currently on their own out in front. The track characteristics do not highlight the potential of our car and the long straights favour the teams that can get the highest top speed. To do a perfect lap here is always difficult and today, Fernando and Kimi found themselves fighting four teams, all within a few tenths. Qualifying was complicated for both drivers and Kimi did a good lap, confirming the improvement we’ve been looking for, while with Fernando, we didn’t manage to exploit all our potential. Because of Ricciardo’s penalty, both drivers start on the clean side of the track and we must try and make the most of it. It looks like being a tough race, fighting all the way, with reliability and fuel consumption playing a very important role.”

Kimi sees progress: “The feeling is a bit better with the car,” Raikkonen told reporters in the Sakhir paddock. “I think the parts I wanted have definitely helped. In qualifying it felt more like we expected and wanted. It’s definitely the right direction. We’re still not where we want to be but we know what we’re doing. It will just take time to get where we want.”

The 2007 world champion said there is no specific area that needs improvement on the Ferrari, as the team needs to make gains in every department.

“We need to go forward with all areas of the car,” he added. “Obviously we need more. Understanding on engines and electronics to improve those small things that make a lot of improvement. We improved a lot of things in the first three races, all areas. [And] I improved a little with the front end.”

Raikkonen said that he has not really suffered many problems with the new brake-by-wire system in the last two race weekends, after it proved troublesome earlier in the year.

“[Brake-by-wire] wasn’t really a problem,” he said. “We had some issues in testing, there were some odd things in Australia.

“It’s all really to do with front end, and if you have a good feeling with the brake it gets easier. We’ve improved in that area.”

Car feeling better than ever: “Yesterday the long runs felt pretty difficult but suddenly on the soft tyres it felt pretty nice,” Raikkonen said. “I think we made the right changes to the car for today so I expect that it should be pretty okay, but I don’t know whether it is fast enough to be fighting with those [other cars for third] and obviously we have to get through the first corner and the first lap.

“We are only going to see [if we can do] that tomorrow, but I am more confident overall with how things have gone than at any race before this year. Hopefully we will get through the first corners, get a good start and go from there.”

Raikkonen could not explain his difficulties with the car during Friday practice, but is said new parts that the team has brought to the F14 T have helped his feeling with the front end of the car.

“The funny thing is that it’s been feeling pretty okay in one or two corners and then suddenly it was feeling very odd, so I don’t know why we had yesterday a very difficult day. This morning was a bit better already but I didn’t drive so well. Obviously we had two outlaps in the morning and then it’s very difficult to say where you are, but the feeling has been better with the car.”