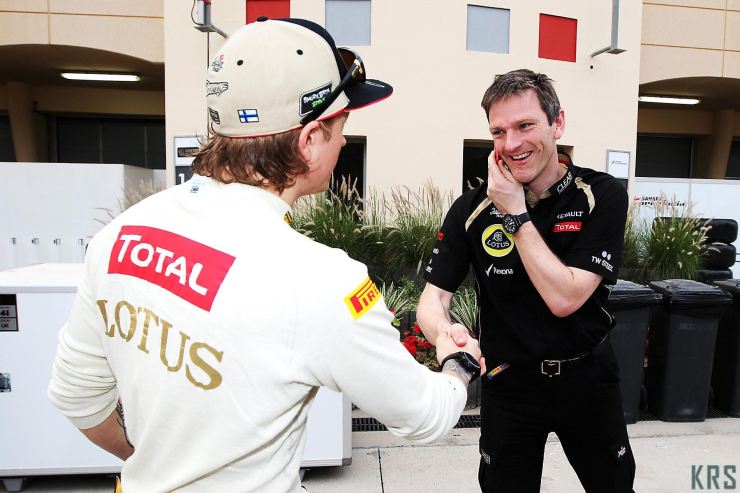 Joining former Lotus colleagues at Ferrari next season won’t make any difference to Kimi Raikkonen’s ability to settle in, according to technical director James Allison.

Kimi Raikkonen may be following a couple of former Lotus colleagues on the road to Maranello, but previous associations won’t necessarily help the Finn hit the ground running in his return to Ferrari.

That is the view of former Lotus technical director James Allison, who made the jump from Enstone earlier in the year. While the Briton’s presence in the Ferrari camp was reckoned to have played a part in Raikkonen’s decision to return – the Finn having also been linked to Red Bull – he plays down its significance.

“I don’t think it will make much difference to Kimi at all!” he laughed, “Beautiful though I am, I don’t think I have a massive impact on his life!

“Kimi’s relationship with the team is predominantly with the people that are at the track, racing the car, with him, with his race engineer and with the chief race engineer and the people that campaign round the world with him. My job is mainly a factory-based one and, while I would try to lead a factory team that is sensitive to what the drivers are saying about the car, and hopefully making the most of the feedback that they give us, my day-to-day interaction with the drivers is not overly extensive.”

Allison admits that he is looking forward to playing a part in returning Ferrari to prominence next season, and sees the introduction of a new technical rules package – and the preparation work already completed before his arrival – as perfect for the rebirth.

“I’ve been very fortunate to arrive at Ferrari at a point in their cycle when a lot of the changes necessary to return to the front rank – I mean right at the front rank, ie winning championships –have been put in place by Pat Fry,” he said, “I think I’m particularly lucky to have arrived and been able to benefit from those investments rather than having to start them from scratch. There is much more to be done but I’m a lucky chap to be picking up where I am.”

Of course, being handed the responsibility of returning the Prancing Horse to P1 comes with no small degree of pressure, but Allison is happy to accept that in order to hold one of the most revered non-driving positions in the sport.

“I think technical director at any F1 team is a very big job, it certainly doesn’t leave room for much else than the job in your life,” he explained, “Ferrari is an extremely prestigious F1 team, with a lot of resource and an extremely high level of expectation. There is really no result other than winning that is good enough at Ferrari.

“There is a lot of pressure to make sure I play my part in achieving that, but it is a wholly realistic ambition. It’s a team with the kit, with the resource, with the people and with the drivers to get the job done, and I’m so looking forward to being there when it happens.”

1 thought on “James Allison on Kimi joining him at Ferrari”