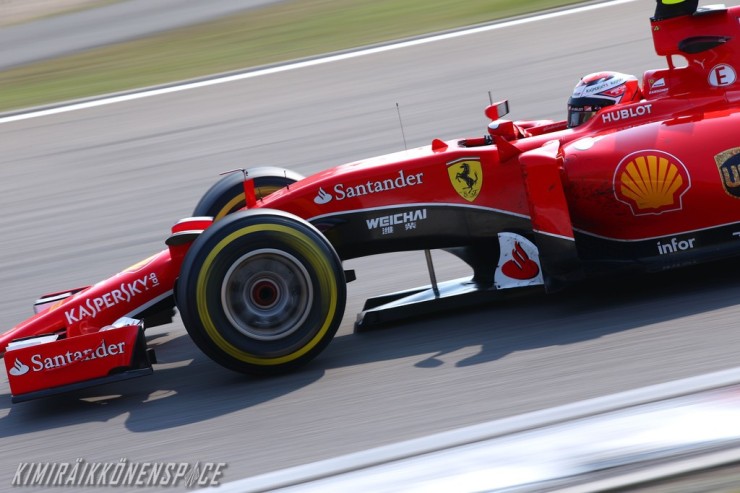 Ferrari.com – Come the end of the third round of the Formula One World Championship, Scuderia Ferrari saw its drivers finish in third and fourth places. Sebastian Vettel made it to the bottom step of the podium and, having started sixth, Kimi Raikkonen came home fourth, thanks mainly to an excellent start. Both drivers set off on new Soft tyres and ran a two-stop strategy. Lewis Hamilton won ahead of his Mercedes team-mate, Nico Rosberg.

From motorsport.com – Kimi: “I don’t see a reason why not [to win]. We have made big gains and we will make big gains during this year. Obviously everybody will improve so it depends what the rest are doing, so it definitely shows we are going in the right way and doing the right things. It is just being patient, we need time, we cannot make miracles overnight. Sebastian showed we can win, but it depends, one circuit is better for one team and the next could be a different story. We need to be up there when something happens to them, or the conditions change. I really feel we will get there to regularly beat them. It’s not ideal for the team to be beaten by Mercedes, but I think we have to be realistic where we are now compared to where we started last year, so we know what we are doing and if we keep working in the same way, then I am sure we will get there. Some races might be a bit closer, but after yesterday’s mistake it was more or less maximum. It’s good for the team but we are not happy to be third and fourth, and we want to really push for the wins, but we have to be happy as a team. We will keep pushing in the same direction as we have done so far push to the limits.”

From ferrari.com –Kimi: “Considering that my position on the starting grid today was not ideal, fourth place is a good result. My start was ok, I had quite a good jump off the line, and at the first corner I decided to go inside and at the end of the corner I was in the right place and managed to take the Williams under braking – my car is really good at that – and managed to pass them. The car was quite good today; the first set of tyres was a bit tricky, but I think it was the same for everybody, and then the next two sets were ok. Towards the end of the race I was catching up, I knew I had the speed and I thought I still had good tyres. I could still have had a chance to try and fight for podium but the safety car came in and we know we cannot change that. Today we got close to the podium, from the next race on we have to have a better weekend, doing everything right in qualifying, and we’ll do our best. As a team we scored the maximum today, we know we are behind Mercedes, but we have to be happy with the result. From tomorrow on we have to make another step to be able to challenge them every weekend; we’ll keep working hard as we have done since last year. We trust the way the team is working: now we have to be patient”.