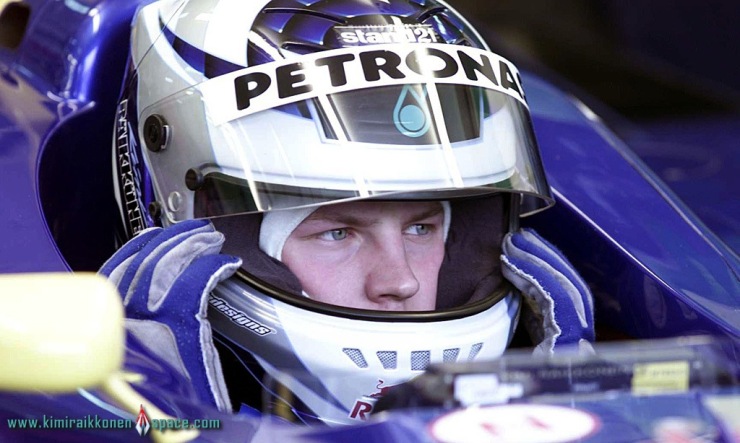 “I saw it in his eyes. I looked in his eyes and I thought ‘I’ve seen this look before. And I know where I saw that look before’. And it gave me goosebumps when I remembered that look. It was Senna.”

Eeckelaert was Räikkönen’s engineer in Kimi’s first test in September 2000 and he was also his race engineer in Sauber during season 2001.

Räikkönen’s F1 test took place in a situation where Sauber was looking for a replacement for Mika Salo, who was going to Toyota. Eeckelaert contacted managers Steve and David Robertson in order to ask about Jenson Button’s contract. Button had debuted with Williams in season 2000 but he lost his seat to Juan Pablo Montoya for season 2001, hence Sauber was interested to know if the Brit would still be available on the market. But Button headed to Renault under Briatore’s wings. The Robertsons offered Räikkönen to Eeckelaert instead of Button.

“This guy is very good, just like Jenson Button is, but only with a different personality. He has a very, very strong character because he has done many things independently without a budget. He is very committed,” Robertsons described the young Räikkönen.

Sauber had already signed Nick Heidfeld for season 2001 and he had one F1 season in his pocket. The team dared to consider a rookie-driver in their team so they offered Räikkönen a F1 test. Before that Räikkönen had only one full season in Formula Renault in his pocket.

Räikkönen drove his first test with Sauber’s C19-car on Mugello’s track on 12th September 2000. Eeckelaert was especially concerned about how Räikkönen’s neck would endure the F1 car’s G-forces, hence they made him drive only three qualifying laps in the beginning. During the breaks Eeckelaert and Räikkönen compared their telemetry to Salo’s and Pedro Diniz’s telemetry from the earlier test. Räikkönen finished 29 laps during the first day. His laptime was 2,5 seconds slower than Diniz’s on that same day, but Eeckelaert was assured that they would see an improvement in speed once Räikkönen’s brains would adjust to a situation where everything moves faster.

During his second test day Räikkönen drove already 40 laps and improved his time to 1.27,130, which was clearly an even bigger improvement than they expected from the opening day’s laptime 1.30,008. By analyzing telemetry Räikkönen found new breaking points and right driving angles to corners.

Michael Schumacher from Ferrari was also driving on the track during the 3-day test.

“Of course Schumacher stopped by to ask: who is this driver who is testing for you?” Eeckelaert remembers.

“When I replied that it’s Kimi Räikkönen, Schumacher said: “he can be fast, he can be fast”, Eeckelaert continued.

First Peter Sauber thought of hiring Räikkönen as a test driver, but Eeckelaert adviced him to take the Finn as a racing driver. During the three test days it became clear that Räikkönen is a very talented and fast driver, but his physical condition didn’t yet endure a GP with 60 laps. Hence Räikkönen started to work with Ayrton Senna’s former trainer so that he would get in shape for races.

Räikkönen drove his second F1 test in Mugello on 28th September. In lap-time comparison he left Enrique Bernoldi slightly behind him, Enrique was also looking for a seat in Sauber with their sponsor Red Bull’s support. The engineer thought that the most convincing matter was how the young Finn evaluated his car’s setup-changes. Despite their sponsor’s requirements Peter Sauber chose Räikkönen as the driver in his team.

Räikkönen debuted as a Sauber driver in Australia GP on March 4th in 2001 and immediately drove to points by finishing 6th. From that day on he has achieved 1 world championship, 19 GP-victories, 69 podiums and 37 fastest laps.

5 thoughts on “How Kimi Raikkonen was discovered”