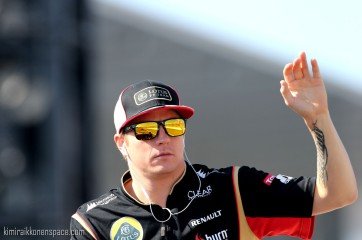 With plenty of work to do after a tough Saturday – compounded by a tricky start to the race – our Iceman found himself fighting all the way to claim an impressive fifth place at Suzuka. Here’s his view on proceedings…

Q: HOW WAS YOUR RACE?
KR: I had a very poor start where I left the line with a lot of wheelspin and lost a few places. This wasn’t ideal and it meant I got stuck in traffic, but I managed to gain some places back later on. It was a pretty normal race I would say and it’s good that we got some points.

Q: WHAT WAS YOUR FEELING LIKE WITH THE CAR?
KR: It was ok – a big improvement from Friday for sure – but it was hard to show our real pace at the beginning as I was stuck behind slower cars for quite a long time. After the final pit stop when I got a bit of free air the car was working much better. It ran well in the last half of the race and I was very happy with it.

Q: YOU PULLED OFF SOME PRETTY IMPRESSIVE PASSES; PARTICULARLY ON THE SAUBER AT THE END THERE…
KR: Unfortunately when you don’t have an ideal qualifying it makes life a bit harder on Sunday. It’s not easy to overtake here and we weren’t so fast in a straight line which made it more tricky, but I got past a few people which was important after the slow start. With Nico [Hulkenberg] I managed to get a good run on him leading up to the chicane which is what made the difference. We did what we could.

3 thoughts on “Sunday in Japan: “We did what we could””