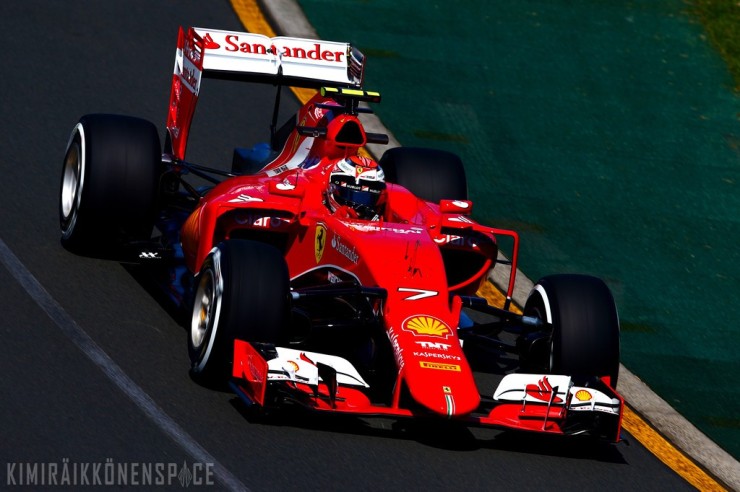 Report – Nico Rosberg was fastest in the second free practice session just ended at Melbourne’s Albert Park circuit, home to the first round of the Formula 1 World Championship. Behind the German Mercedes driver, who posted a 1.27.697, came his team-mate Lewis Hamilton (1.27.797) and the two SF15-T of Sebastian Vettel (1.28.412) and Kimi Raikkonen (1.28.842.) Both Scuderia Ferrari drivers worked on set-up, running different aero downforce levels and comparing the Medium and Soft compounds chosen by Pirelli for this track. Raikkonen, just over seven tenths slower than his team-mate, admitted over the radio that it was “not a very good lap”. FP2 Times:

Report – The Ferraris of Sebastian Vettel and Kimi Raikkonen finished the opening free practice session of the Australian Grand Prix in fifth and eighth places respectively, to get the 2015 season underway. Vettel completed 13 laps in his SF15-T with a best of 1.31.029, while Raikkonen did 14, the fastest being a 1.31.310. Both drivers used the Medium tyres, working on a programme featuring aero testing and set-up work to suit the car to the semi-permanent Albert Park circuit, which was still too dirty for any more in depth work. FP1 Times:

Kimi Raikkonen: “It was a typical Friday of free practice. In the first session I could not drive very well and it was difficult to put a good lap together. So, for the second session, we made some changes to the car before the long-runs and, in the end, the feeling was better. Now if we can put everything together and find a good lap, we should be OK. It was a positive day overall, and the feeling hasn’t changed since winter testing: I think the whole package has improved. On the other hand, it’s only Friday, and we know we still have a lot of work to do”.