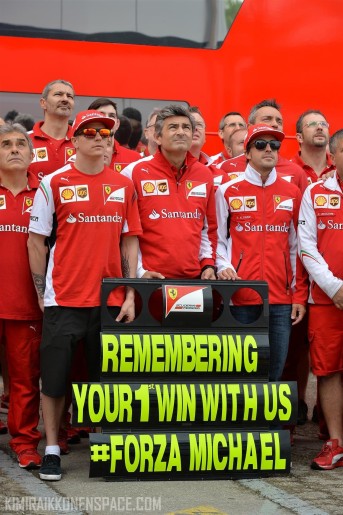 Raikkonen delivered his strongest performance of the season relative to his team-mate, but was powerless to prevent Alonso passing on fresher tyres in the late stages of the race, despite making it as difficult as he reasonably could. (Read report at ferrari.com)

Kimi Raikkonen: “That was a complicated race for me, with the main problem being a lack of grip and in general, it was very difficult to find the right balance on the car. Going for a two stop strategy proved to be the wrong choice because tyre degradation meant I couldn’t push all the way to the end. Overall here, we went better than in the last race, maybe because the characteristics of this track are very different to those we have raced on so far, but we cannot be happy with sixth and seventh places, because we are a long way off where we want to be. It will take time, but we will do our utmost, because we know where we must keep pushing if we want to improve.”

Pat Fry: “This weekend, which was difficult for the team and the drivers ended with a less than spectacular race in which we unfortunately lacked the pace to make up places from our grid positions. Considering how difficult it is to overtake at this track, the start could have made the difference, but the positions remained more or less the same throughout the order. If fuel consumption wasn’t much of a problem, tyre degradation affected the race from start to finish. Apart from the two Mercedes, the lap times of the various teams were very similar, which meant the chances of being able to carry out or be subjected to an undercut, along with managing the traffic, took priority over the strategy choices. The gap to the leaders is certainly not a surprise and will not discourage us as we tackle the work we must do to improve our car. Now we will try and make the most of the two test days this coming week here in Montmelò to move forward on the development of the F14 T. The aim is to give our drivers a more competitive package.”