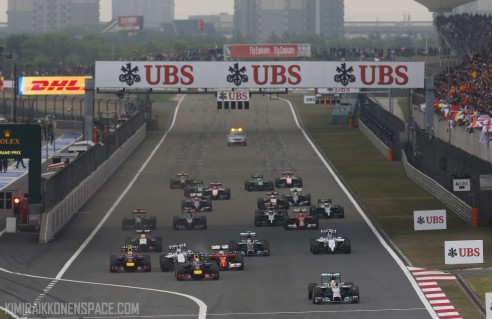 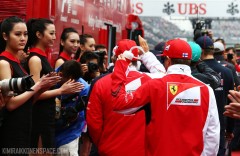 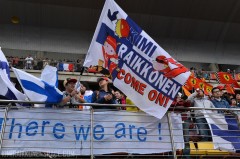 Report: First podium of the season for Scuderia Ferrari which comes as a great relief after the very difficult race in Bahrain. Fernando Alonso took third place after attacking all the way from the start. It was at this point that he had his most worrying moment, colliding with the Williams of former team-mate Felipe Massa, but the F14 T proved to be strongly put together.

Kimi Raikkonen had a more difficult time, as he is still not feeling totally comfortable at the wheel. The Finn got away well making up a place to sit in the points positions right from the opening lap, but in the end, he could do no better than eighth.

For Scuderia Ferrari there is still plenty of work to do to close the gap to the best, but this podium is some small reward for all the hard work everyone in Maranello has contributed to improving the F14 T.

The race was won by Lewis Hamilton taking his 25 win, ahead of his Mercedes team-mate Nico Rosberg.

Raikkonen: “I don’t know why we had to save fuel.” Spagnolo: “We saw some movement on the fuel system.” #F1

Raikkonen: “What the hell has happened in the straight line? There is no power whatsoever. Is the switch in the right position?” #F1 — F1 Fanatic Live (@f1fanaticlive) April 20, 2014

Kimi Raikkonen: “This has been a really difficult weekend. Right from Friday morning, I suffered with problems that we didn’t manage to solve completely and today in the race, I couldn’t get the result I wanted. The start was good, I made up two places but then I couldn’t make up any more ground, as I just didn’t have the pace, nor much grip at the front or the back. In the final stint on new tyres, the car handled better, but then, as the tyres degraded the situation got complicated again. I think the difficulties I encountered here stem from a combination of various factors, from my driving style combined with the low temperatures and the characteristics of the track. Today, we brought home valuable points thanks to the intense efforts of the whole team and now we will continue to work ceaselessly to improve. Fernando’s result is very encouraging and proves we are moving in the right direction.”

Driving style, not motivation, the issue: “My view is that it’s probably more to do with driving style, plus the weather with the cold conditions and not getting the tyres working,” he said. “Obviously if there was some issue then we would not be fast or happy with the new tyres, so I think it’s a combination of cold conditions, the circuit layout and my driving style. I don’t think I work the tyres very hard, so when there are cool conditions and wet conditions … for many years it has been hard to get the tyres working. Today it feels that when you have a new tyre it works well until the grip from the new tyres goes away and then you struggle and you have to go slower and the tyres cool down more – everything goes round and round and you cannot fix that. It’s a thing that everybody hates, but there is not a magic thing and I cannot necessarily change everything with my driving. At the last race I could have done two stops [and gained an advantage] but the safety car changed [the race], so it works for you at some places and then against you at some. We just have to work and find some solutions when we have this and hopefully not end up with similar issues. Once you end up with that it’s hard to get out of it, especially in the race.”

Asked if his lack of results affected his motivation, Raikkonen said: “I don’t know why you always come up with motivation. If I didn’t have motivation I wouldn’t be here answering these kinds of questions. It’s fuck all to do with that. We have bad races and it’s an unfortunate thing, but the aim is to improve and get where we want to be.”

Pat Fry: “Today’s result is a reward for the effort that all the team is putting into every area. Both drivers got away well, managing to make up two places immediately and, luckily the collision between Fernando and Felipe Massa’s Williams left the F14 T undamaged. In the first stint, with Kimi we lost a bit of time behind Grosjean and that prevented him from making up ground on his rivals, in a race where tyre degradation and graining played an important role. The choice made at Fernando’s first stop saw him take second place: from then on, we concentrated on managing the gap to the Red Bull and tried to keep Rosberg behind us for as long as possible. This weekend we made some progress and in general, the speed of the car has increased, both in the corners and on the straights, but we have to be realistic about our current potential and continue working, because the gap to Mercedes is still big and no one within our team has any intention of giving up.”