In the Ferrari hospitality unit perched above the paddock lagoon, Kimi Raikkonen had his first meeting of the Chinese GP weekend with the world’s media.

Kimi did see signs of progress over recent weeks. “At the last race, the overall feeling I had from the car had improved and the problem in Bahrain was just that we were a bit slow,” he maintained.

“I expect that already here this weekend we will have improvements on some small things. It’s difficult to say when we will be at the level we want, but with new rules there is always the possibility of suddenly finding a big improvement, but sometimes progress can be slow.”

“It’s important that we now have a better understanding of the car after the first races and we have improved a lot since Melbourne, even if it’s hard to see that because others have also progressed. Bahrain was one of the most difficult races for us and hopefully here it will be a bit better.” 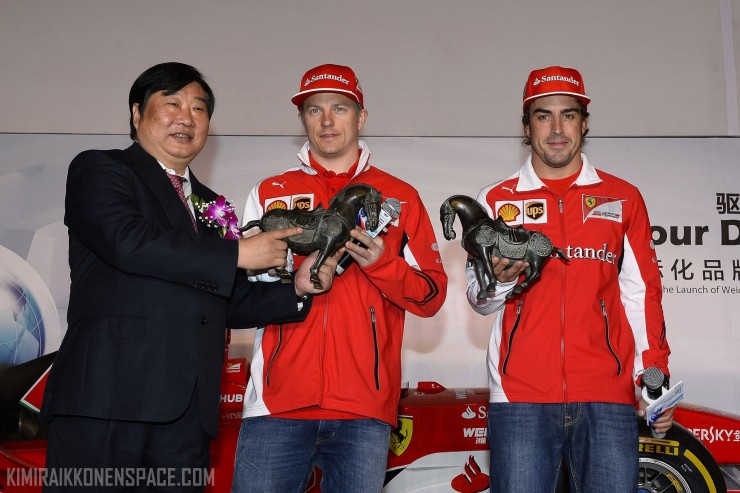 A warm and friendly welcome greeted the Scuderia Ferrari drivers on arrival in Shanghai and those sentiments were echoed when they attended a meeting organised by Scuderia Ferrari sponsor Weichai. For its home race the company decided to unveil its new logo which has been on the F14 T since the start of the season.

The drivers were introduced by the President of Weichai, Xuguang Tan who was presented with a bronze Cavallino to celebrate the partnership between the two companies. According to the Chinese horoscope this is the year of the horse and in an exchange of gifts, those from Weichai were also based on sculptures of horses. The drivers answered questions relating to this weekend’s race, which gets underway tomorrow with the start of free practice. Fernando Alonso was particularly complimentary about the Shanghai circuit. “It’s a track the drivers like a lot and winning here last year was a great feeling.”

He also went on to explain that the weather can have a significant effect: “If it was to rain it could overturn the usual order among the teams because driving is much harder in these conditions,” a sentiment Kimi Raikkonen agreed with. “It’s a very demanding track, which depending on the conditions can shake up the field a bit. Of course we will be doing our best to get a good result.” The Finn looked surprised when he discovered he has many fans in this part of the world. “I must say I didn’t know, but I am really happy as it’s always nice to find that so many people appreciate what you do.”