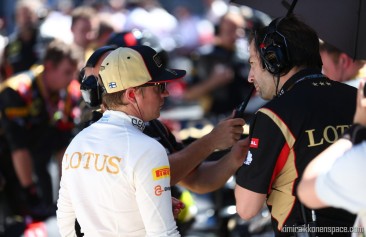 Having occupied a solid P5 for much of the race, Kimi found himself forced to fight back for a single point in today’s Monaco Grand Prix, and the Iceman is not amused…

Q: Today’s result seems to sum up your weekend here in Monaco…

KR: For sure it’s not been the easiest round of the season so far, but the car felt good today and it was really disappointing that it ended the way it did. Because of one stupid move [from Sergio Perez] we’ve lost a lot of points to Sebastian [Vettel] in the Championship. Not the ideal weekend but there’s nothing we can do about it.”

Q: Talk us through what happened?

KR: He hit me from behind, that’s about all there is to it. If he thinks it’s my fault that he came into the corner too fast then he obviously has no idea what he’s talking about. It’s not the first time he’s hit someone in the race; he seems to expect people to be always looking at what he might do, then move over or go straight on if he comes into the corner too quick and isn’t going to make it without running into someone. It almost happened earlier on and if I hadn’t gone across the chicane that time he would have hit me, so it’s like your just waiting for it to happen. I understand being aggressive – it’s part of racing – but you also have to be smart. I don’t think talking to him will make any difference.

Q: You seemed to be controlling things pretty well until that point?

KR: It was going ok. My start wasn’t too bad and from there it was a pretty normal Monaco race with everyone following each other round and waiting to see what happens in the pit stops. We were in P5 for pretty much the whole time and I’m sure we could have stayed there if things had gone differently, but I don’t think much more was possible as it’s almost impossible to overtake here.

Q: You’ve said overtaking is impossible here, but that was some fightback at the end!

KR: Well, that was a bit different as I had fresh tyres and we should never have been in that position in the first place but it was good to at least get a point at the end. In a way, it almost makes it more frustrating as when we had the clean air after the pit stop it was probably the first time you saw how quick our car really was here. Anyway, there’s no point to keep thinking about other peoples’ mistakes. We have another race coming up quite soon so hopefully we’ll have some better luck there and see what we can do to close the gap back to the leaders.

2 thoughts on “Sunday in Monaco: “Disappointing how it ended…””