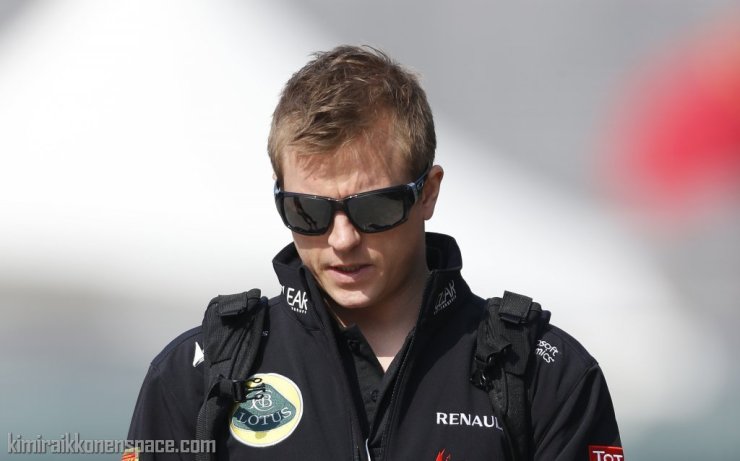 After setting the second fastest time in the opening day of action in Shanghai, Kimi’s confident that good things could happen this weekend.

Q: How was the first day out on track?

KR: If you look at the lap time it looks to have been a pretty okay day. For sure, there are things we have to improve and you never know what will happen tomorrow, but it’s a reasonable start to the weekend. We seem to be happy with the soft tyres and maybe not as happy with the harder ones, but we’ve still got time to improve and we’re certainly not struggling so it could be a good weekend.

Q: How does the soft tyre feel better than the medium?

KR: The softer tyre seems to have much more grip and it suited our car better today. For some teams the soft tyre gives a big improvement, for other teams not so much. We will have to see how many laps the soft tyre last for as that will be important in the race. For sure it will be the tyre we use to qualify on.

Q: Is there much more pace to come from the car?

KR: We can definitely improve. We have some pace to come from the car in the usual areas with setup. We’re not far from where we want to be, but if we can find a little more speed with the harder tyres we’ll be happy. My quick lap today could have been better, so there’s some more pace to come even if we don’t improve the car, but hopefully we do…

What do those flags mean to Räikkönen?

“It’s nice – especially since it’s really not so that a Finn carries each flag. It’s better this way than no flags waving at all.”

The Chinese media asked Kimi if the E21-car has championship-potential.

“We will see it at the end of the season. The last race in Malaysia wasn’t ideal in that sense. We won the opening race in Australia and are at least in a better position than last year at this stage,” Kimi said.

“At this very moment it looks like we have all the chances to drive for the title, but I have no idea what will happen during the season.

“We do our best every weekend and hopefully we are fighting for the championship at the end of the season.

In paddock-rumours Räikkönen is placed in Webber’s seat next season. Kimi isn’t interested in the subject at all.

“They always talk and speculate a lot in F1, who is going where and what is happening here and there. It’s completely normal and it’s also cool when your own name is mentioned, but I have no interest to start commenting on rumours, I haven’t done it before either,” Räikkönen said.

Räikkönen has confessed that he is Vettel’s buddy. Can you be friends with a teammate?

“I’m sure that there are friends who are teammates. In the final games nobody are enemies to each other. But can teammates be closest friends – I doubt it.

“Usually relationships are normal. At least I haven’t had any difficulties with any teammate. Then again I can only speak for myself…

Eric Boullier told in Lotus-team’s statement that Räikkönen walks his own path and that he is not going to start looking after Kimi and give him advice. Does an approach like this make Boullier the best possible team manager for Räikkönen?

“Well each team have their own discipline. Each team works in their own way. When we do everything 100 % we don’t get complaints and there hasn’t been any problems,” Räikkönen said.

What does Räikkönen think about team orders?

“There’s nothing new with that compared to earlier. I mean there have been team orders for at least the last 15 years. Sometimes they are ok, sometimes they hurt.”