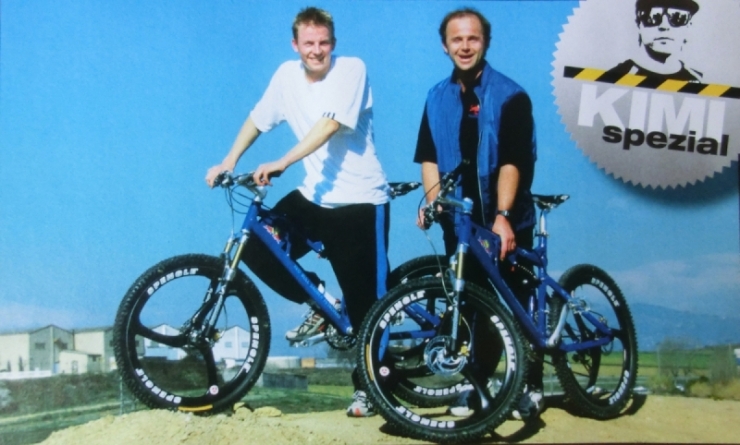 Short answers, steely look. The Iceman image is sticking irrevocable on Kimi Räikkönen. Motorsport-Magazin takes a look behind the curtain of the iceman with Jo Leberer.

With Kimi Räikkönen F1 is richer of another colourful character. His car control let the fans cheer, his egocentric way the journalists, sponsors and team principles despair. The statement from Ferrari team principle Stefano Domenicali that he lives on his own planet, Räikkönen countered in his usual way. “I like living on my own planet. It’s nice here.” The opinion of others the Finn bounces off ice cold, that’s why his former McLaren team principle Ron Dennis gave him the “Iceman” nickname. On and apart form the track Räikkönen is at full throttle – not thinking about consequences. One week after he signed the contract with Lotus he contested a snowmobile race in Austria. Other drivers would have taken it slow to not risk anything – but Räikkönen isn’t any racing driver. He put the foot down but lost control and crashed into a snow wall. The consequence was a injury on his hand and negative headlines. But that the Finn, who once fell drunk from his yacht or appears as James Hunt in a gorilla costume, knows very well. Someone who knows how it looks behind the Iceman mask is his old companion from times at Sauber, Jo Leberer. He tells Motorsport-Magazin who Kimi Räukkönen really is and which moments will stay unforgettable.

The comeback of Räikkönen

Actually I’m not surprised that Kimi’s comeback went so well. When he decides to drive then it’s clear for me that he has considered this closely. There were many opinions from so called experts about Kimi. When he decided to comeback I got many requests but I let the other say their opinion. Of course I had my opinion and I wondered about those from experts. I know Kimi from the past. He is so motivated, so strong-minded and that he can drive everybody knows. So why he should not drive at the front again? I had no fear cause he didn’t forget anything. Lotus needed someone who is quick and that is Kimi.

Kimi doesn’t have motivation problems. Everybody knows that he lives his life like he thinks it is right. You know where you stand with him. Thank god we have such types in Formula 1, we don’t want retort drivers. That not all drivers are the same, work the same, that makes it so interesting. His critics I can only say that he is a great guy.

The start at Sauber

When he started at Suaber, nobody knew him. We have trained a while together in Filzmoos, there I really got to know him well. I can only base from my own parameters but his approach, his body control, his stamina, his brilliance regarding races, his attention, his strength of will, his discipline, his will power in the sense of that he doesn’t have to accept everything, were right back then already. I knew when he is quick also in the car then he will really be successful. That was proved. Shortly after that he went to McLaren – the step you normally don’t do. But Kimi made it.

When he came to us we made a list of priorities. He had done only one single seater season, 23 races and then got in F1. That was a big step, then you can’t do the normal preparation program. At Sauber he had this chance. In December he got the licence and in January/February he tested. At the same time we have physically prepared him gradually to the upcoming charges. We have felt one’s way regarding neck etc. A driver can only be at the front when he also physically top fit. In March was the first race and Kimi got with his sixth place his first points already. That you have to imagine.

Unbelievable how Kimi appeared already at the beginning. How cool despite the pressure. I thought that some day the nervousness will have to come. Like it was the same for other drivers, even the top drivers. But it never came. Before his first race I massaged him right before and he fell asleep. Half an hour before the start I had to wake him up and he just said: “Jo, let me still sleep a bit. Give me 5 minutes.” You have to imagine, that was before his first race! That’s simply brilliant. This coolness has to be inherent. It was a pleasure to work with him.

That was unbelievable as he was far back in the standings. The whole Sauber team was of course happy about his win. On Monday after the race we both flew back to Zurich and he said to me: “Hey Jo, tomorrow we meet in Zurich and celebrate – only close friends, my wife and I want you to be with us.” And that after many, many years – I was very glad. The world champion invites me personally, I couldn’t refuse that invitation. We don’t see each other often but there is a relationship. When you have him as a friend once, you have him always. Although he changed the team and therefore actually was an opponent, the contact stayed. That is nice, that speaks for his character.

5 thoughts on “The man behind the Iceman persona”