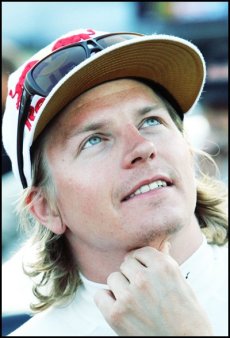 Kimi Raikkonen will be given all the time he needs to get back up to speed in Formula 1, with his new bosses adamant that there is no expectation on him to deliver straightaway.

With Michael Schumacher having shown since he came back the difficulties that even top-line drivers can face getting dialled back into F1, Raikkonen has been assured that Renault – which will be renamed after sponsor Lotus next year – will be patient with him.

Group Lotus CEO Dany Bahar said on Monday that Raikkonen’s two-year absence from F1 will not make it easy for him to produce results immediately – and underlined that all the outfit was looking for was consistent improvement.

“You cannot expect from a driver that was absent for two years to come back and adapt to the new tyres and new regulations from day one, so he needs his time,” said Bahar during a lunch with selected media in London on Monday.

“But whether this time is three days, six races or 20 races, we will see. What is important is to see how his tendency goes towards the performance. If it is always improving, then of course we will give him the time.”

Although there has been much talk in recent weeks about Raikkonen’s motivation levels – and whether or not he will be prepared to knuckle down if the 2012 Lotus is not a frontrunner – Bahar insists that Raikkonen knows fully what he has let himself in for.

“Kimi is a cool guy, and he has grown up,” he explained. “He is not as young now. He knows what he does, he knows what people expect from him and I think he takes it a bit more seriously now than when he was at McLaren.”

“But he is not the same kid as he was at Sauber and at McLaren. These are different times, he has to deliver and he realises that.”

Bahar also believes that, despite there being no guarantee that Raikkonen will produce as much as in his last time in F1, the team made the right call in opting to invest in his services.

“Kimi is Kimi, and he is a world champion in F1,” he said. “He deserves definitely to have a higher value than a normal driver, just because he is Kimi Raikkonen.

“Everybody appreciates that – but this is not Ferrari and this is not a world championship winning car at the moment, so you always have to see this side as well, and maybe our team, or any other team in that field, cannot afford to pay that kind of salary now.

“Kimi has realised that, but he will never sell himself under his value. He is too strong a character for that. I think what he is getting now is a fair value for what he delivers, but we have to see the performance on the track.”

[… On the back of the bold decisions to lure Kimi Raikkonen back to F1, and sign Romain Grosjean at the expense of Vitaly Petrov, Bahar believes the soon-to-be-called Lotus outfit has shown how committed it is to success.

“It shows the determination that we have, and it shows that there is understanding of what it will take,” explained Bahar during a media lunch in London on Monday.

“The team’s two main partners [Gerard Lopez and Eric Lux] said, ‘look this isn’t about commercial matters and going for the highest bidder, it was about going for the best drivers we can get.’

“We did an analysis together and we said, although Vitaly has a sweeter commercial element to him, we shall go for pure racing. It may be more difficult for us commercially but we are up for the challenge. And we will raise the money if it is necessary.” …]