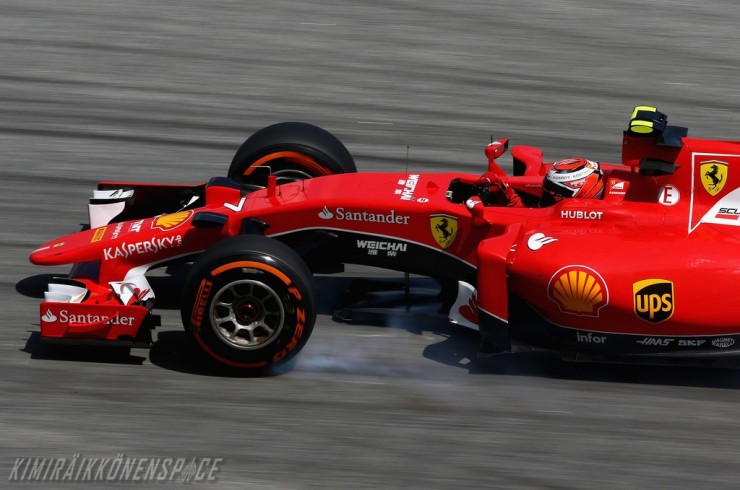 Scuderia Ferrari: Once again, Kimi Raikkonen posted the second fastest time at the Sepang circuit, in the second free practice session for the Malaysian Grand Prix. And also just like in the morning, it was a Mercedes that was fastest, this time that of Lewis Hamilton (1.39.790.) Kimi did a 1.40.163, while in the other SF15-T, Sebastian Vettel was seventh with a 1.40.652. Both Ferrari men worked on a programme that focused on a comparison of the Hard and Medium tyres and some set-up work.

Kimi Raikkonen: “Today we did all we were supposed to do. In the morning the feeling with the car was better, in the afternoon was a bit more tricky, we had some handling issues and some problems with the wind and the heat, but the laptime were not so bad. Unluckily we had red flag when we went out with new softer tyres.The car is still not perfect, but I’m sure we can improve for tomorrow. We have some work to do on the set up to make everything easier, but we’ll do our best and we’ll see where we end up in qualifying”.

From ESPN: “I don’t know what the others did. I just jumped out of the car and I am here. I will have to look at what the others did, but we have more to do and I think we have to still improve because we are struggling a bit. The car is still not perfect.”

Scuderia Ferrari: The Ferraris finished the first free practice session of the Malaysian Grand Prix in second and third places. Nico Rosberg in the Mercedes was fastest in this first bit of action for the second race weekend of the season, with a time of 1.40.124. The two Ferrari men split an aerodynamic evaluation programme, running two sets of the Hard tyre on the demanding Malaysian track. Kimi Raikkonen completed 17 laps, to finish behind Rosberg with a 1.40.497, while team-mate Sebastian Vettel managed just 13, (1.40.985) after having to spend much of the session in the garage while the cooling system was checked.