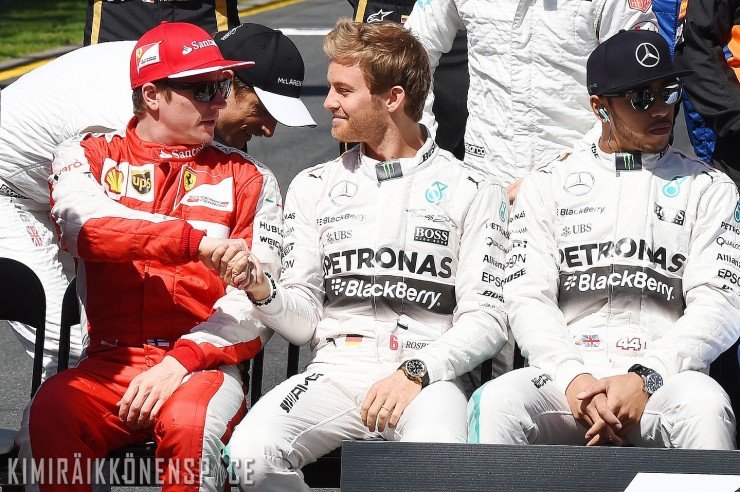 Kimi Raikkonen believes Ferrari has closed the gap to world champions Mercedes in terms of race pace and is now capable of fighting at the front in Formula 1.

The Scuderia was the fourth best team in 2014, trailing Mercedes, Red Bull and Williams, but it showed a step forward in winter testing and converted that form in the season-opening Australian Grand Prix.

Sebastian Vettel finished third, while Kimi Raikkonen was set to come home at least fifth before a problem caused by damage from a cross-threaded wheel nut sent him into retirement.

In qualifying, Vettel and Raikkonen were fourth and fifth behind Felipe Massa’s Williams but both felt the car was capable of third, behind Mercedes’ Lewis Hamilton and Nico Rosberg.

“I believe in the race, we are not far from Mercedes,” said Raikkonen. “I’m sure we can be up there and fight at the front.

“Obviously it depends on the race and what they do, but we had too many things not going our way in the race.

“Even with the damage on the floor at the rear and also the end plate got damaged in the second pit stop, the car was still fast.

“I strongly believe we have a good race car, a good car over one lap.

“It is obviously not fast enough yet but I think the gap in the race is much smaller than qualifying.

“We have to improve in qualifying as Mercedes is ahead of us by some margin.”
[Source: autosport.com]

VIDEO: Watch Kimi being interviewed at Melbourne (from 2:09mins onwards):

On Ferrari’s 2015 car: “A lot better car, as a team we are much happier compared to where we finished last year but we still have a lot of things to improve, make things better, but it’s a much better start.”

On being a father, (has it changed you?): “I am already a dad so for me hasn’t changed anything. Obviously at home it’s a different story but it’s a great thing. Obviously F1 is just a work, it’s not my life, you know I have a life outside of this, F1 is my work and something that I enjoy to do; outside is much more important and it’s a lovely thing like I said. It’s early days so far.”

4 thoughts on “Kimi: we are not far from Mercedes”