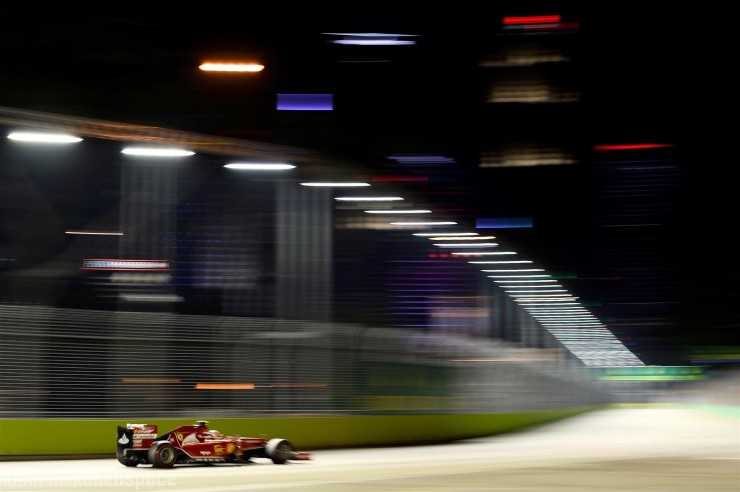 Hamilton was only sixth fastest on his first run in the Q3 top 10 shootout but despite a lock-up at Turn 1 on his final lap, a particularly strong run through the middle part of the lap allowed him to pip Rosberg.

Red Bull locked out the second row, with Daniel Ricciardo third ahead of Sebastian Vettel, just half-a-tenth separating the two.

Fernando Alonso was fifth fastest, only a tenth behind the lead Red Bull, although Ferrari team-mate Kimi Raikkonen was not able to do better than seventh after suffering a car problem on his second run.

Kimi laments engine problem in Q3 – “We struggled a bit at the beginning of the weekend, this morning we changed the car and it was to my liking. Then we got hit by the problem, it’s a shame as we could have done a good job today. It’s racing and unfortunately it happens. We’ll just try and sort it out and keep pushing and improving things. We didn’t have any data so we think it’s electronic issue, no power and it was cutting when I went full power, hopefully it’s not a big problem.”

Software glitch cause for Raikkonen problem – “I think it was some electronic thing, so when you tried to apply power it just cut off. Hopefully it is just a small thing, but it was big enough to destroy our qualifying in the end. We’ve been struggling with the car a bit all weekend, but we kept changing it and we changed it for qualifying, which was good. It was one of the few times that we have changed it to something really good that I wanted. Unfortunately we had a problem, but there was a lot of potential today and it was nice to have a good feeling with the car. I know I kept messing up the middle sector all the time and there was a lot of potential on the other sectors. There was a good feeling with the car and I could put it where I wanted. It was feeling easier to drive, so it’s a shame what happened today, but that’s our sport. Sometimes you hope it would happen during a different weekend when you’re having difficult times.”

Kimi Raikkonen: “I’m very happy with the handling of my car. Yesterday, we made some changes to the set-up and in qualifying, I finally managed to drive the way I wanted. Unfortunately, in Q3, on my final run on new Supersoft tyres, a problem forced me to pit. It’s a real shame as I felt comfortable in the car and we had the potential to get a good result. Now I want to feel confident for the race and I hope the team manages to solve the problem without too much difficulty. Tomorrow, we will do our best to bring home as many points as possible, aware that we are going in the right direction.”

Pat Fry: “This was undoubtedly one of the closest qualifying sessions of the season, with the top six cars all within just over three tenths of one another. On this track, a good set-up and a high level of aerodynamic downforce makes the difference and at every corner you can gain or lose a lot of time. And, as is the case at all street circuits, the abilities of the drivers comes to the fore. I would like to be commenting on a better result, because both Kimi and Fernando didn’t make any mistakes. Kimi was comfortable with the car all weekend and we are sorry that he had a software problem on his final Q3 run, because he could definitely have got a better result. This incident confirms just how important is reliability, especially at this point in the season. Fernando showed what he can do on this track and it’s always a pleasure to see him at work. Like Kimi, he improved in every session, getting the most out of the package he had. In free practice, we saw a significant performance difference between the two Pirelli compounds and I’m sure that will make the race particularly absorbing. At this point of the season, reliability plays a key role and here in Singapore, an appearance from the Safety Car is almost guaranteed. Therefore we will have to keep an eye on all the variables in play and try and bring home as many points as possible for the team.”