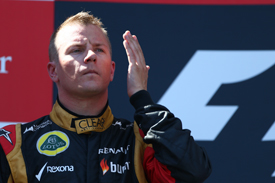 Back-to-back – not too bad

The back-to-back British and German Grands Prix are done. We got 28 points altogether from these two, and that brought us a little bit closer to the leaders. So not too bad ­ but it could have been better, obviously, much better even…

We had a disappointing qualifying session in Silverstone. Then the weather improved for the race day, and so did our car, as well.

It was a race filled with all kind of happenings. We didn’t have that many problems with the tyres, but, at the end of the day, we should have tried different strategies for the last laps of the race.

It could have been an easy podium finish. Now we lost three positions in the last few laps and got only P5. Sebastian Vettel had to stop because of a technical problem and he was left without any points. That was a good opportunity to come much closer than we managed to do.

In Germany the weather in a race day was even better. We had a good weekend overall. The qualifying could have been a couple of tenths better, so we could have been right behind the front row. Now we started forth and then stuck behind Mercedes for a few laps.

The race went well. We had the speed to fight for the top place. The problem with the radio was causing problems right while we would have needed it the most. The options between staying on and race until the finish with the used prime tyre was a risky one, but very tempting, as well. We took the other way and changed the option tyre for the last stint.

It brought us home in the P2. It’s good to finish in a podium, especially in Germany for me, but this time it could have been better, too. We didn’t have any issues with the car and with the tyres.

The warm weather suits us very well. Let’s hope it will be hot in Hungary, too. It’s still a long season and there is no reason to start focussing on anything else but winning.