Despite the continual speculation surrounding Raikkonen and a likely future move to Red Bull for next season, Lopez has no doubts the 33-year-old Finn is content with life at Lotus.

With a quarter of the season gone heading into this weekend’s Monaco Grand Prix, Raikkonen is currently Sebastian Vettel’s closest rival as he trails the three-times champion by just four points.

Whether the duo will be in the same team next season is still to open to debate, although Lopez does not believe that will be the case.

“I’m not concerned,” said Lopez, speaking to Press Association Sport when asked whether he was worried Raikkonen would leave.

“We know we want Kimi to drive for us next year, but then we also know Kimi’s character well, which means you can’t force him to do anything.

“I know he’s happy, and at this stage if he had to choose (which team to drive for next season) I know where he would be.

“The main thing about Kimi is he naturally wants a car to win, and he has got that with us.

“If he could find a better car somewhere else, and he had an option to go there, then I’m sure he would consider it.

“But I know we’re giving him what he needs, and as long as we keep on doing that then he’ll stay with us.”

Although doubts have been raised as to whether Lotus could compete financially with Red Bull should it come down to money, Lopez offered a revealing insight.

“I saw some numbers which are rubbish,” added Lopez.

“I don’t think there are many drivers who make more money than Kimi does in Formula One right now.” 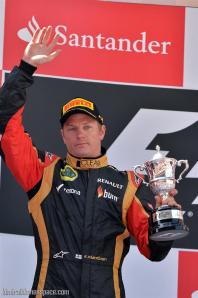 Although it would be in Lotus’ interests to tie Raikkonen to a new deal as quickly as possible, again Lopez sees no pressure.

“With Kimi you never really sit down with him to discuss something as specific as a new contract – you just talk and that’s it. It’s a different relationship,” said Lopez.

“I know it sounds odd, but we don’t run our team like other teams run theirs, which is why Kimi fits with us.

“Of course, we do talk to Kimi about a contract, but most importantly we talk to him about how he feels and about how to move forward, and that kind of automatically leads to the other.”

Suggested to Lopez it boils down to a shake of the hand and having a gentleman’s agreement with Raikkonen, he replied: “That’s exactly what it is.”