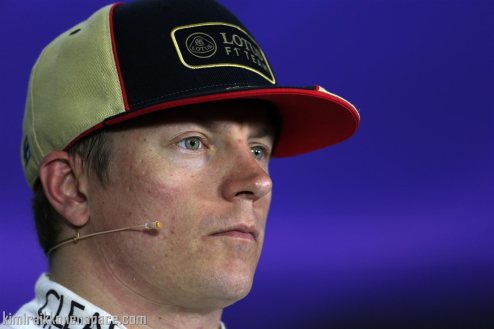 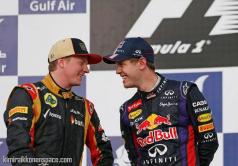 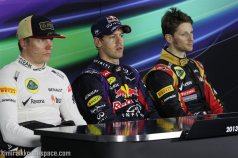 It was a great race. If I could come to our second-placed finisher here: they call him the Iceman but they should really call you Mr Consistency. Another podium. Tell us about your strategy today. On reflection do you think that was the right one? Was second place the best you could hope for?

Kimi RAIKKONEN: Yeah, I think yesterday wasn’t ideal. We planned to… I wanted to already, Friday, try to do a two-stop because it felt OK and today it worked well so we gained a lot of places. I didn’t have a very strong first or second lap, so I lost two places. After that the car started to come to me and I could start pushing more and more, and in the end it was OK.

Q: Speaking of strategy, Kimi, you said you wanted to make a two-stop strategy work. You felt that was the right way forward. But did you need to be five, six places further up on the grid? Was it qualifying that cost you a chance of the win today?

KR: I think it didn’t help but I think overall we would not have had the speed for beating Red Bull in here this weekend. And even if yesterday we could have been a few places better but still we couldn’t have challenged on speed whatever we would have done to the front. So, I mean, I don’t think on the speedwise we could really have challenged for the win. But I would say then second was the best that we could achieve and also third for the team so a good result.

Press Conference – QUESTIONS FROM THE FLOOR

Q: (Heikki Kulta – Turun Sanomat) Kimi, you have been on the podium six times here in Bahrain; which has been the best of these six races?

KR: I don’t know. It doesn’t really matter. Second is obviously better than third place but we haven’t won and that’s what we try to do. Today we got good points, we didn’t lose too many to Sebastian but obviously it doesn’t help to finish second if he’s winning all the time. So we try to find something but all of them have been improved, in a way.

Q: Kimi, how much different is it to seven, maybe eight years ago?

KR: First of all, I don’t think Pirelli could please everybody, whatever they would do. There’s always somebody who will complain, even if they changed and made them happy then I’m sure there will be people who want something different and not happy so I don’t think it’s their job to try to always change things if somebody’s complaining or doesn’t like it. Even in the past, if we would have put the same amount of fuel in the cars, we couldn’t have run at full speed all the time, because the tyres would have gone off so I don’t really think it’s all that different now. We just made more stops and ran less fuel in those days. I would say that’s really the biggest difference. I’m sure the tyres wouldn’t have lasted long in those days.