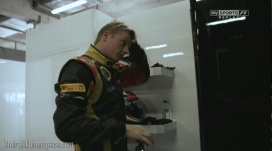 He’s already won one race this season, lies second in the drivers’ table and – according to Ferrari’s Fernando Alonso – is currently driving better than anyone else on the grid. But what does Kimi Raikkonen make of the start to his second year with Lotus? We caught up with the straight-talking Finn – eighth on the grid for Sunday’s Bahrain race – to get his take on his 2013 campaign to date…

Q: You seem to be the ‘all-weather’ man this year: whatever the conditions, whatever the tyres, in the end a podium is almost certain. Are you the ideal driver right now?
Kimi Raikkonen: Ha, I wish I was. Clearly you have to look at the conditions and cope with them – even though our car is not the best right now, we are able to adapt to situations pretty well. And, of course, I am always trying my best to deliver a good result.

Q: It looks like you are almost unaffected by whatever is going on around you. You may not always have the best qualifying – just like today – but most pundits have you on their shortlist of potential winners for the race…
KR: Ah, look back at Malaysia. There I had some issues with the car, so no race is a walk in the park for me as you suggest. (laughs) That’s how it goes. But for sure I always try to maximize the yield of points.

Q: There were high expectations today that you would go out in the last two minutes of qualifying and show everybody the way. But you ended up in P9 – and will start from P8 due to Lewis Hamilton’s gearbox penalty. Was there no more to come?
KR: No, we haven’t got the speed for one lap. Hopefully the race will show a different picture.

Q: Is that what your team principal Eric Boullier calls your finishing qualities?
KR: Could be. One lap is one thing, but to do 57 laps and stay at the top of your game is quite another.

Q: That must make you a much sought-after man. There has been talk that Red Bull could imagine you joining them next year…
KR: I have no contract for next year – that much is true. But further than that, I don’t want to discuss the matter. I want to do well this season and everything else will fall into place.

Q: What would convince you to stay at Lotus? What would make you move on? And do you want to stay in F1 racing in the first place?
KR: I haven’t thought about all that yet – I feel good here. But yes, there are many things that are undecided and there is still a long way to go this season, so let’s see how things unfold. We will see pretty significant changes when teams switch to their 2014 car development – and then it will be interesting to see what is going on.

Q: Would you be a better team mate for Sebastian Vettel than Mark Webber? Could it be that friendship is overrated in this matter?
KR: I don’t know. These are not the things that I think about right now.

Q: Would you like to have a more challenging team mate? Or is there something in being the de facto number-one driver?
KR: Look, sometimes he (Romain Grosjean) has a difficult weekend and sometimes I do. In the end it does not matter for me as I don’t really need somebody who is pushing me. I do my own thing.

Q: You were a surprising third in last year’s championship. Now you are an arguably even more surprising second in the standings. Are you surprised yourself – or is this in line with your personal expectations?
KR: Sure, it’s interesting to beat your own benchmark. The only plan I have in my head regarding that is doing better – as to how much better, let’s see. I am pretty relaxed about all these self-appointed point counters and soothsayers. Just let’s wait and see.

Q: Money makes the world go round and that includes development and development speed. Could that correlation make you nervous this season?
KR: True, we have less money than some of the other teams, but I am not sure if that will really hurt us or not. Last year we were able to do pretty well, so why not this again season?

Q: Malaysia was a bit of a drop in form for you. Why did it happen there and could it be symptomatic of conditions like that – ie higher temperatures compared those in Melbourne and Shanghai?
KR: Nothing to do with conditions. We had some issues with the car, that’s all. Conditions are overrated.

Q: What’s the best part of your car?
KR: I would say that we are more or less okay everywhere. We don’t have really bad points anywhere, but also not really good points. The car works okay.

Q: So let’s try this: what’s the best part of your life right now?
KR: I have a lot good things to do and I don’t complain. My life is okay.

Q: Can you comprehend all the lamenting about the tyres? You seem to be pretty unimpressed…
KR: We cannot change them right now so you better get used to it. Lamenting over things never helps.

Q: Last year here you were on the podium. What is likelihood of a repeat tomorrow?
KR: We are lacking a bit of pace, but in a long race with strategy involved anything can happen. Sure the starting position is not ideal.

Q: Strategy will again play a major role. Will we see daredevils trying to run a two stopper, or will three stops be the way to go?
KR: I think three stops will do it.

Q: So you will be running on three stops?
KR: I don’t know yet…