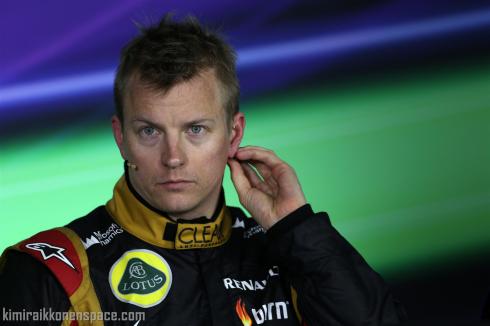 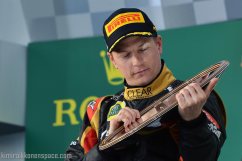 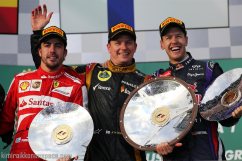 Kimi RAIKKONEN: It’s the first race, so you don’t really know how it’s going to go, how the tyres are going to be. I didn’t really do any long runs in the winter. I knew that I had a good car, so I had a feeling that it was going to be a good race but you have to get through the first laps and then go from there.

KR: No, I mean Fernando was catching me at some point, when I was taking it a bit more easy and there was some traffic, so I just wanted to make sure that if the rain comes or something happens we have a bit more gap. I was still taking it pretty easy. Like I said, the car has been very good all weekend and it was a pretty nice race, not so difficult.

Q. One quick word with our winner Kimi Raikkonen: Kimi, you lead the world championship. You had two years away rallying, you came back and won a race last year did a great job but here you are leading the championship again. How does that feel?

KR: It feels good but it’s only after one race. It doesn’t really change our aim and our work for this year. Definitely we are happy with the win but there is an awful lot to still do to try to win the championship. We seemed to have a good car here and hopefully it works well in the next races also.

Q. Kimi, did you believe from that seventh position the win was there for you today?

KR: I was pretty disappointed this morning after the qualifying. Obviously there was only one lap really on the dries and I took it a bit too easy and got a bit of a small mistake in one corner. It was more timing and getting it right than really the maximum speed from all the cars, so not the ideal starting place but it was still ten places better than last year, so not a disaster in that way. I knew that my car is quite good. It’s been feeling good all weekend and when we did the longer run it felt good. We only destroy the front tyres so we knew if we get the front tyres lasting it should be fine. In a way I was pretty confident – but of course you have to get through the start and the first lap and it’s the first race so you never know what’s going to happen with the conditions and the circuit after the rain and with tyres, so there’s a lot of question marks. I felt I had a good car and it turned out to be pretty good.

Q. Alan Permane said to you, on the subject of tyres in parc ferme, “we got it absolutely right today.” Was that just one of the ingredients where everything seemed to fall into place for you?

KR: Yeah, I mean our plan was to do two-stop and it’s always difficult, especially the first races, to really know when to stop, and not doing it too early and not too late. We got it, like he said, exactly right. The team worked very well and we had a good plan, and we follow the plan and it work out perfectly for us. I could save the tyres and I could go fast if I needed and I could really drive very easily. One of the easiest races I’ve done to win the race. Hopefully we can have many more of this kind of races.

QUESTIONS FROM THE FLOOR

Q. (Leonid Novozhilov – F1Life) Kimi, do you give a chance to your opponents in Malaysia?

KR: It’s a difference place, it’s going to be much hotter there so it’s very difficult to say how the cars will feel, who will be fastest after having just one race. I think we have to do two or three races before we really know who is where and what’s going to happen. It’s probably going to rain again in Malaysia at some point but it will be a different circuit, different conditions. Our car worked well here at least and usually – at least last year – in hot conditions it’s been good for us so hopefully it will turn out to be a good weekend next week.

Q. (Heikki Kulta – Turun Sanomat) Kimi, I know how much you love winning. When it comes easily like this, in the first race, does it mean even more to you?

KR: A win’s a win, it doesn’t really matter how you get it. Of course I’m happy that we didn’t really have to go full speed all the time so it’s kind of a good sign, a good race for us, but as I said, it might be a completely different story in the next race, so there’s nothing to jump up and be so extra happy about, because it’s a long season and in the end we want to be on the top for all the races and it’s going to be a hard season for that. As I said, everything worked well, we had no issues with the car all weekend, the car’s been good, the team has been working well. After the winter test, when I probably did the least laps of everybody in the winter, we didn’t have a very special winter. As I said before, we didn’t have a very special winter the previous year and not this winter, but the car has always been good in the race so so far so good and hopefully it goes like this.

Q. (Don Kennedy – Hawkes Bay Today) Kimi, that seemed to be a very popular win judging by the crowd reaction out there. Can we perhaps expect a re-release of the ‘I know what I’m doing’ t-shirts? They’re pretty popular, I gather. They only had a hundred released and they sold out. Can we have a few more?

KR: No. That was last year and nothing to do with this year or this win. It was just people asked for them and we made them but now it’s not going to happen, not from me at least, maybe somebody else. There’s nothing planned. It’s happened before many times, as I said, but this time it came on TV so I’m sure some odd things will come through even this year. Maybe it gets on TV, maybe not.

Q. (Flavio Vanetti – Corriere della Sera) Kimi, can you compare the feeling that you have now with the one you had in 2007 when you won with Ferrari?

KR: For sure a win is always a win so in that way we have a good feeling, the best start that you can have in the first race of the season, but of course many things have happened since then. Still, I won here and it’s nice to be winning the first race again. But we started in seventh place and had to fight through the positions to win in the first place and I led more or less all the race. Different years but a similar feeling because obviously we won the first race and leading the points.

Q. (Erkki Mustakari – Finnish News Agency) Kimi, through the years we have seen that whoever can develop the car best through the season has the best fun towards the end of the year. Do you think Lotus has enough resources to keep up the work because there are not many ways you can go from here because you started by winning?

KR: Yeah there was a big question mark last year in our team whether we can keep up with the bigger teams. Of course it’s not going to be easy for us. I’m sure we have the people, all the tools to make it. The money is a big part of the thing. For sure we don’t have the same budget as Ferrari or Red Bull or Mercedes but we could show last year that… we did pretty well on the money and the things we have. I have no doubt we have the people and the tools but of course if we get more money it will help and it will give us a better chance and more fair play against the bigger teams. Like I said, we have good plans, and if we can follow it up it might be good, it might not. It’s a long season. If you do things right it will go nicely but one thing can change the whole year. You do a few things a little bit wrong it can turn around and go downhill after that. So we just have to do our normal things, like we did last year and put the good effort into new parts and if we’re happy we keep them and if not we have to look more closely. But like I said, so far it has been good, so there is no reason why we can’t keep it up.