In the three years of participating in Zoom Charity Auction, we have seen that aside from his main job of driving cars really damn fast Kimi Raikkonen has quite an interesting flair with photography; his snaps speak more than the eye initially shows! (Previous entries: 2015, 2014, 2012).

Here is the Iceman’s entry for 2016’s auction – as an avid fan of ice-hockey and regularly watching his native teams compete, he photographed a cute ice-hockey mascot which his mechanics assembled onto his F1 car’s antenna. Go Finland!

Other F1 drivers entries for this year: 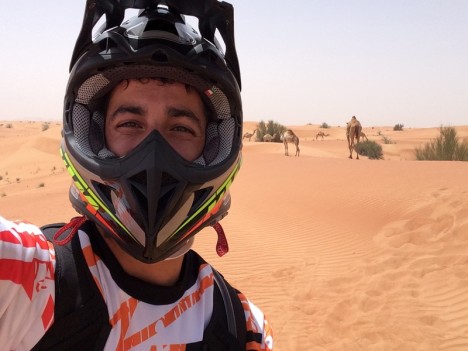 Daniel Ricciardo: ” Being in the middle of the desert – it’s a peaceful yet exciting experience. One that involved the odd camel too!”

Bernie Ecclestone, Formula 1’s drivers and its team principals have joined forces to showcase their photography skills in the 2016 Zoom charity auction.

Now in its fourth year, the event is held in aid of Great Ormond Street Hospital Children’s Charity and is joined by an engineering services firm as its new title partner as Zoom is now powered by Princevalle.

Throughout a memorable 2015 season, the stars of F1 were each asked to take a photograph, which gives a window into their high-octane lives. All of the photographs have been signed by the participants and will be auctioned by Coys (www.coys.co.uk) during an exclusive gala evening at London’s InterContinental Park Lane on Friday 5th February. It will be followed by an online auction on the Coys website of a selection of the signed photos which anyone worldwide can bid for.

Zoom is the only auction of signed photos taken by the stars of any sport. It gives fans a glimpse behind the scenes at the track and reveals how F1’s superstars enjoy themselves away from it. The photos are like personal postcards from the sport’s biggest names and they come from all over the globe.