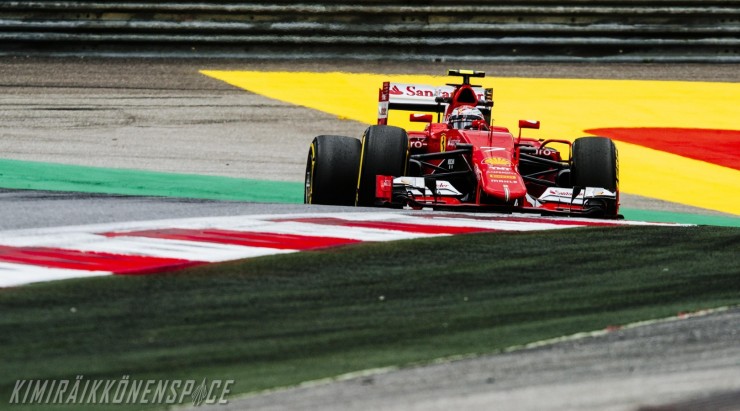 In the second free practice session for the Austrian Grand Prix, the team concentrated on long runs looking ahead to the race. The weather forecast for Sunday is currently very different to the conditions expected for qualifying and this means it will be very complicated to select the best set-up, but the team acquired a lot of useful data. Come the end of this afternoon’s 90 minute session, Sebastian Vettel was fastest with a 1.09.600. He stopped running 15 minutes before the end so the team could carry out some checks on his car. Behind the German came Nico Rosberg, who did a 1.09.611 in the Mercedes, while in the other SF15-T, Kimi Raikkonen was third with a 1.09.860. [via ferrari.com]

Mixed fortunes for the Scuderia Ferrari drivers in the first free practice session for the Austrian Grand Prix, eighth round of the World Championship here at the Red Bull Ring.

Kimi Raikkonen had a trouble-free time, finishing third fastest with a 1.11.028, while Sebastian Vettel was sidelined after just four laps, with a transmission problem. Fastest was Nico Rosberg, who posted a 1.10.401 ahead of his Mercedes team-mate Lewis Hamilton (1.10.709.) [via ferrari.com]

From  espn.co.uk – Kimi: “We did a normal Friday but then only did one lap on the super-soft. I would have preferred to run it on the long run but I destroyed it myself. We tried to run it on the other car but I don’t think they could run as long as they wanted, so it’s one of those things that didn’t pan out as we wanted. We did the soft long run and more or less everything is OK – still some things to improve and work on but not too bad. We’ll see on Sunday.”

From ferrarif1.com – Kimi: “It has been a good day of work, but it’s only Friday and it’s difficult to know where we are compared to our opponents: because of the layout of the track here all the cars are closer to each other. Unfortunately I could only run one lap with the Supersoft: I was going a bit fast and I ran wide, then I destroyed the right front tire by locking it. It was a pity, I would have preferred to do the long run with this compound. I did it with the Soft compound and even if I was a bit stuck in traffic it was more or less ok. Now we have to wait and see what happens tomorrow. We have to make sure that everything works well, then start from there and do a good job over the weekend.”