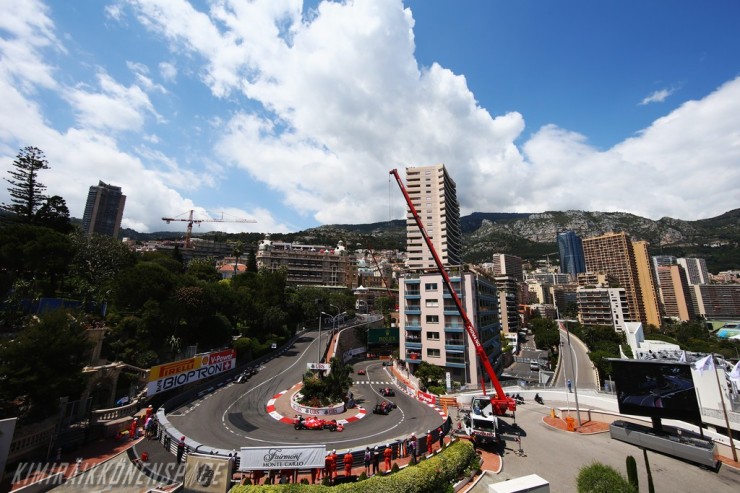 Sebastian Vettel finished the Monaco Grand Prix in second place. The German spent all 78 laps in the slipstream of Nico Rosberg’s Mercedes, managing to get ahead of Lewis Hamilton, who led for the first 65 laps, until he made a second pit stop. Vettel crossed the line 4 seconds behind the winner, having run the race at a very competitive pace. Raikkonen also fought hard all race long, showing a strong pace. This is Vettel’s fifth consecutive podium from six starts in “red.” [ferrari.com]

‘Come on where are the blue flags.Do I have to f*****g overtake him,or what?’ –#KimiRaikkonen on team radio #MonacoGP pic.twitter.com/BGYqKyJl5v

Listen to the above team radio here.

“DID YOU SEE THE CAR THAT PUSHED ME OFF THAT WAS NOT VERY NICE” Classic Kimi Round 2. #F1 #MonacoGP pic.twitter.com/601suwzWlI — Peter Leung (@BaronVonClutch) May 24, 2015

Watch the above incident here. Listen to the team radio here.

From autosport.com – Kimi: “It’s not very clear what you’re allowed to do and what you’re not allowed to do because someone can get a penalty for something and another cannot. It usually is a penalty for these kind of things and this time not. There’s no certain way of what is allowed and what is not so in my view it was pretty obvious but the stewards think differently.”

From ferrari.com – Kimi: “We knew that after starting from sixth position it would have been a difficult race. I was all the time behind slower cars and there was no way to overtake them even if I had a much better pace. At the the pit stop we managed to pass one Red Bull, we gained one place but we lost it for a stupid reason. I was following my normal line when Ricciardo hit my rear tire and pushed me wide, regaining the position. It’s not very clear what you are allowed to do, it’s really odd but there’s nothing we can do. For the next races we have to make a better job overall to make sure we get tires working and things sorted out without mistakes on Saturday in qualifying. This will make our life a lot easier on Sunday. Now we go to Canada a bit happier overall but it’s too early to make predictions, we have similar tires but the layout of the track is completely different, so let’s wait and see.”

From espn.co.uk – Kimi: “Obviously we have to go away and think as something wasn’t right in qualifying yesterday. Get the car working as best as we can and gain some places. Hopefully for the rest of the year we can do that and make the race a whole lot easier. On Sundays we seem to have the speed but starting in bad positions doesn’t help.”

From f1i.com – Kimi: “Its never going to make the race exciting when you qualify a bit out of place. You normally end up following cars and get stuck in position so it was a frustrating race.”