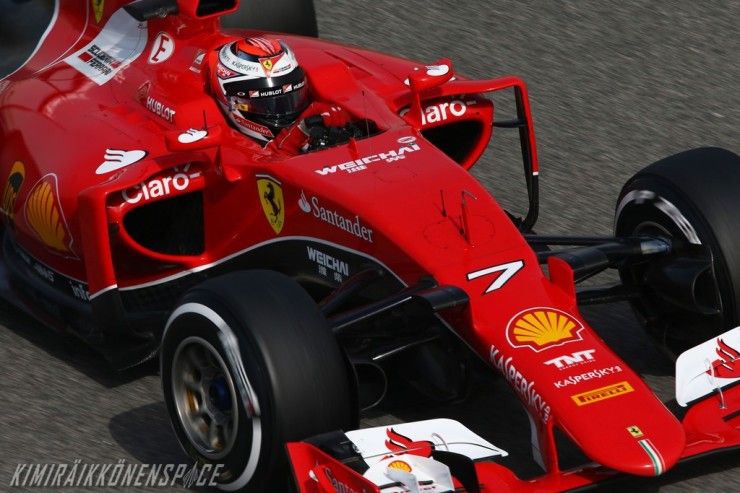 Nico Rosberg was fastest in the second free practice session for the Bahrain Grand Prix. Once the sun had set, the floodlights turned the Sakhir track from night to day, as the Mercedes driver did a 1.34.647 to beat his team-mate Lewis Hamilton (1.34.762.) Third was the Ferrari of Kimi Raikkonen, who posted a 1.35.174, followed by Sebastian Vettel, who did a 1.35.277 in the other SF15-T. The German’s session came to a premature end after his front wing was damaged in a coming-together with the Force India of Sergio Perez. The Friday programme was thus completed, the second session providing valuable data, taking place as it did at the same time of day as qualifying and the race. [ferrari.com]

From ferrari.com – Kimi: “I still haven’t had a look at the lap times of the session, but I think we are not as good as we want to be. In the second session it was a bit tricky with the set-up, we had some problems with the handling and we struggled in a few places. This evening we’ll analyse all the data in order to improve and do a better job tomorrow. Having a clear qualifying makes life easier in the race. I don’t know if we can challenge Mercedes, tomorrow is another day, conditions can change and this plays a big part, so let’s wait and see.”

An incident in #FP2 will be investigated when Raikkonen and Hamilton appeared to use the slow lane #BahrainGP pic.twitter.com/INdscFGyBl

The official statement: only a reprimand for Kimi. No penalty. #Raikkonen #Ferrari pic.twitter.com/uQjPUASlEK

The fourth round of the Formula 1 World Championship got underway with the two Ferraris topping the first time sheet at the Sakhir circuit. Just a few days after the Chinese Grand Prix, the SF15-Ts of Kimi Raikkonen and Sebastian Vettel were first and second in the first free practice. The two Ferrari men concentrated on the usual task of working on set-up, with Kimi quickest in 1.37.827 and Sebastian second with a 1.38.029. Third was Valtteri Bottas with a 1.38.390 in the Williams. Just a handful of laps for the Ferrari duo – 13 for Kimi and 12 for Sebastian- as they sat out much of the session in the pits, because the track is still very dusty. Vettel also had a sensor problem that had to be sorted out. [ferrari.com]