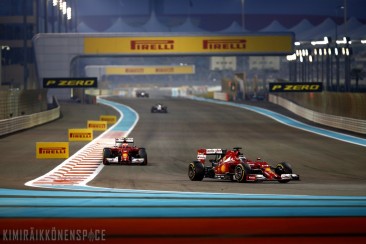 Report – It was not the best of days for Scuderia Ferrari in the final Grand Prix of the season here in Abu Dhabi. Fernando Alonso finished ninth and Kimi Raikkonen came home tenth. Both drivers got away well, the two of them making up two places, coming round at the end of the opening lap in fifth and sixth places. Shortly after that, Fernando passed Kimi and made his first pit stop, followed next time round by the Finn. However, coming in early did not work out for them as they lost a lot of time in traffic, finding themselves just outside the points as the first run of stops ended. Not much changed in the middle stint and with 15 laps to go, Fernando was tenth, one place ahead of Kimi.

Towards the end, as Nico Rosberg slowed to finish 13th, it promoted Raikkonen into tenth place for 2 points. At the end of the race, both drivers thanks the team, Kimi looking ahead to next year and Fernando saying his farewells. “You are all special people, thanks to all of you, I will miss this team a lot.”

#Kimi7 on the team radio: “Tough year guys, but thanks a lot for all your support, we’ll get it back!”

Kimi Raikkonen: “It was a very difficult race but we knew right from the beginning that this track would be tough for us. The start was good but then, at the first stop, I already lost a few places and from then on I couldn’t move up the order. The car handled well and I had no particular problem, but today we lacked the speed we needed to attack. All season we have faced a series of difficulties which we put a lot of effort into solving and we learned a lot from that. We know which direction we need to work in to be competitive as soon as possible and I have absolute faith in the team.”

Marco Mattiacci: “This race was the epilogue to a difficult season for the team at the track and for all the men and women of the Scuderia back home. It’s the last day of a season that saw the beginning of a technical revolution that required a different approach and work methodologies and it was a year that presented a steep learning curve for all of us. Unfortunately, the result here in Abu Dhabi reflects the performance level seen in recent races, even though Fernando and Kimi fought all the way as always, showing just what they are capable of. On behalf of the team, I want to congratulate Lewis Hamilton on his fantastic win and I also want to once again thank Fernando, while regretting that we never won the title together. Nevertheless, we had the pleasure of sharing unforgettable moments that are now part of Ferrari history. I also thank Kimi, who this year has patiently dealt with a car that was not easy to manage and I am sure we will soon see him able to express his great talent. Now we are continuing in a methodical and disciplined fashion with the work behind the scenes in Maranello, so as to give our drivers a competitive car with which we can return as soon as possible to the top level of this sport.”

Pat Fry: “First of all, we must congratulate Lewis Hamilton for a well-deserved second World Championship title. For us it was a complicated race from start to finish and our final result was a confirmation of our qualifying performance. Over all 55 laps, both Kimi and Fernando struggled with little reliability problems which affected their cars. Having gained two places at the start, we had to make the first stops very early because of tyre degradation. That put us back out in traffic and unfortunately, our management of the power units and the tyres meant it was difficult to make any overtaking moves. After such an intense last race now we turn all our attention to the work that awaits us, beginning with next week’s test, aimed at getting started on next season as soon as possible.”