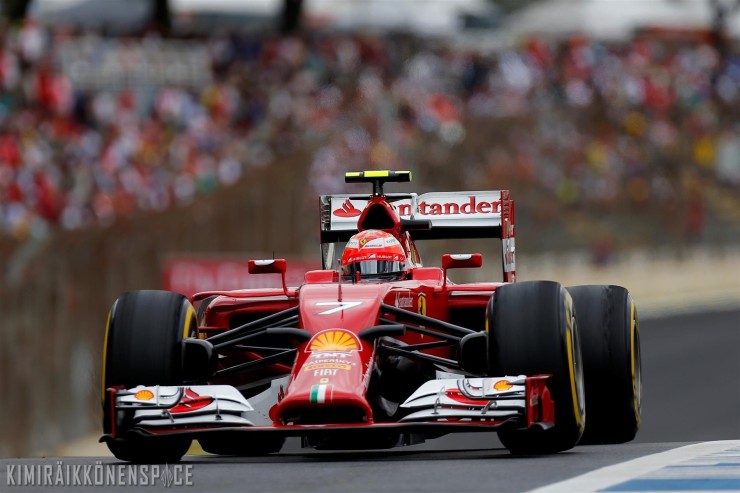 Report – Fernando Alonso and Kimi Raikkonen will start tomorrow’s 71 lap Brazilian Grand Prix from the fourth and fifth rows of the grid, in eighth and tenth places respectively. Like the previous three sessions, this fourth one took place in the dry, as the threat of rain didn’t materialize. Q1 went off smoothly for Kimi and Fernando, who went through to the next stage in seventh and tenth places, although they immediately had to make use of the Soft tyres. The fight was tighter in Q2, with the Scuderia drivers having to use their remaining sets of the softer of the two compounds. This time, they got to Q3, again in seventh and tenth places. In Q3, they were only able to do one run each, with Fernando posting a 1.10.977 and Kimi a 1.11.099.

Kimi Raikkonen: “This weekend, I’ve had a better feeling in the car and, in general, I’ve had no major problems while I also felt more comfortable with the front end. We lacked speed today and even though this was our quickest lap of the weekend, it was not enough to finish higher up the grid. Obviously, I’m a bit disappointed to be tenth and, without having done a race simulation yesterday, we are a bit in the dark like most teams. However, what counts is that finally I feel much more comfortable at the wheel, which means we are making progress.”

Pat Fry: “Qualifying was very tight for us, as it was for Red Bull and McLaren, while yet again in Interlagos, Williams and Mercedes proved to have the best package. That was clear from Q2, when the gaps were very close from fifth to tenth places, with the six drivers split by just one tenth. Kimi and Fernando made no mistakes and, even with these grid positions, we will try and exploit any opportunity tomorrow. The weather forecast is still uncertain and usually it’s difficult to predict here. It will be interesting to see how the tyres perform, given the little long run data we got yesterday because of the numerous red flags. Now we will work on preparing for any conditions, aware that apart from performance, reliability will also play a key role.”

Raikkonen – Better feeling with car: “Not really new parts but it’s just different things that we’ve been running or not been running some things that we’ve had available. It’s not new designs, it’s just trying to run the car differently. It’s been pretty good all weekend. We finished tenth but there were no major issues. I think we were close to our maximum speed unfortunately. Maybe a couple of tenths could have been found but it’s not like something is wrong. It’s been pleasant to drive the car all weekend so that’s a nice thing. Obviously finishing tenth is a different story but we definitely have been making some progress on that side. We have to see how it is in the race because we couldn’t do the long run yesterday with all the red flags but it’s been going in the right direction, for sure. New cars are always different. We tried many things this year in races and it hasn’t worked out and has probably cost us some points, but I want to try things and find out. It’s been such a difficult year anyhow that I would rather try things and if it doesn’t work I’ll pay the price for it, that’s fine. Next year will be different because you have a new car. It’s a different story. I’m sure it will be a lot better car, a lot better package from what we have learned from here. We can improve for sure and like I said this weekend the car has been behaving pretty nicely. There are areas we have to improve, that’s for sure. Yes there was some understeer in qualifying but I don’t think you’re going to get the car right for every lap and unfortunately you make mistakes when you push for the limit. So it’s been a better feeling for sure.”