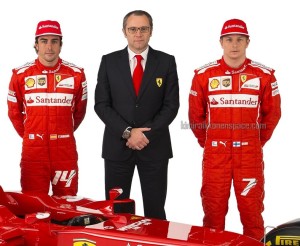 Ferrari boss Stefano Domenicali says that his team has started the new era of hybrid turbo technology “in the right way” and added that in new signing Kimi Raikonnen he has a driver who knows that for Ferrari, “finishing second is a tragedy.”

In an extensive interview with Gazzetta dello Sport today, the 48 year old team principal says that there he is pleased with the way his team has responded to falling short the last few years – he has a photo on his office wall of the 2010 Abu Dhabi Grand Prix debacle which cost Fernando Alonso and Ferrari the world title; a reminder not to get complacent as things can change quickly in F1.

Ferrari’s new engine covered 444 laps of Jerez in the back of the works car, the Sauber and the Marussia, which made a late start and the works car seemed to be able to do the mileage without too many problems.

“In a very different kind of contest from previous years we needed to confirm certain fundamental parameters and we have done that,” said Domenicali. “It is a sign of the robustness of our project which gives us hope. But we must be careful; in terms of performance we haven’t seen anything yet from anyone. We will only know where everyone is after the second Bahrain test.” (22 February – 2 March)

“From a reliability point of view Mercedes has started well, also its customer teams have covered a lot of kilometres.”

As for Red Bull, Domenicali is cautious and refuses “to write off such a powerful adversary” after the team’s extensive reliability problems in the first test in Jerez. “If they have isolated the problem they can make up the lost kilometres,” he said.

On the main talking point around Ferrari this year, the driver pairing that all of Formula 1 is looking forward to seeing in action, Alonso and Raikkonen, the Ferrari boss says that the decision to put them together was “rational, not emotional” and adds that Raikkonen is “extremely motivated and has the experience to manage a difficult championship, such as this year’s will be. He knows how to handle the pressure of driving alongside Alonso and driving for Ferrari, which is always under the spotlight and for whom finishing second is a tragedy.”

(Compared to the last time he was at Ferrari in 2009, Raikkonen “is more mature, more expert, closer to the team. He’s already been to Maranello a lot; he comes he almost every week. He knows what he is capable of. He knows that this is an important challenge for him. He knows what he has to do with a champion like Alonso, with whim he has to work in an integrated way.”

There are a couple of other interesting notes from the interview; responding to Bernie Ecclestone’s comment that the new hybrid formula is “a farce”, Domenicali is cautious on making pronouncements too soon, but interestingly notes that, “we need to be prepared to intervene if the new F1 is losing something in terms of emotional appeal.”

On the controversial new rule to double the points for the final race in Abu Dhabi, Domenicali says that “rules must be respected,” but adds, “If we want to say that this is too artificial, this is true.”