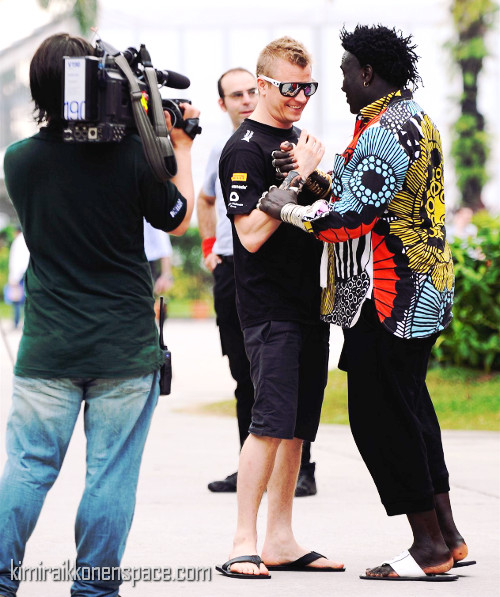 Kimi Räikkönen has millions of fans all over the world, but I doubt anyone can beat the emotionality of Moko, who’s persona the whole F1 paddock knows as just ‘Moko‘.

Moko was born in Senegal, he loves Marimekko’s colours and he became a die-hard Ferrari fan when Jody Scheckter, as the first African, won the WDC in 1979 with the red car.

After that Moko has experienced big emotions when following especially Räikkönen’s driving.

“I am happy now that Kimi returns back home nex year. I spoke with him some time ago and he told me: ‘Moko, I’m coming home’.”

“What a duo it will be – Kimi and Fernando Alonso. Now they only have to get a good car, because if the car is bad then it destroys the legacy of these two top drivers.”

Moko, who has made his fortune in diamond-business, says he has followed Räikkönen’s career starting from Sauber.

“When we met I immediately noticed that this boy has a mind of his own and a killer instinct. I was immediately interested in his personality. When Kimi looks at you he sees and is a aware of everything. Kimi is a completely amazing guy once you learn to know him more deeply.”

He still has his lucky cross.

“It was a great day for me when Kimi decided to come to Ferrari for the first time. As usual I was in Australia following the opening race and it was under the trees in Albert Park when Kimi walked by with Todt. I shouted to him: “Hi, mister Raikkonen.” He stopped and walked back to me.”

“I told him that I wanted to welcome him to the house. I was worried over how he would do. I took one of the many crosses hanging around my neck and gave it to him. I told him that it would bring good things and that Kimi would win the race with the cross. Kimi just smiled, but he took it – and he won. Kimi told me some time ago that he still has the cross.”

“What I have experienced with Kimi is something that you don’t see in F1 – a genuine human being.”

Moko was naturally in Brazil when Räikkönen became WDC in 2007.

“Kimi came from the podium celebrations and he asked me to come with him. He gave me his soaked racing outfit, the one he used in that same race. Todt told me to take it since Kimi wanted to give it to me. I told him that I need to take it to the cleaners, but Kimi adviced me to keep it the way it was, because he had written a dedication to me on it.”

“That was my life’s highest moment,” Moko says with a deep feeling – and walks into Ferrari’s hospitality area like it was his home.