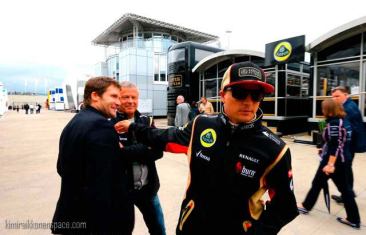 Steve Robertson has guided Kimi’s driving career since the small formula series as his manager. He has mastered Kimi to McLaren, Ferrari, Lotus, and now he is also negotiating with a championship-winning team – Red Bull.

A few months ago Robertson praised how Kimi Räikkönen had rocketed as the F1  driver market’s hottest name. On Friday in the Silverstone Grand Prix paddock, Robertson confirmed that if possible, Kimi has become an even hotter driver with the interest he has awakened.

“When you look at Kimi to this year he has made absolutely spectatular results. He opened the season with a victory and has after that always been consistently even, although also unlucky in the last two races.”

“The general reception on the paddock is very outstanding for a guy who delivers that kind of results. Kimi’s level is so unbelieavable – 24 races in a row with points – so the top teams always look first at a driver like Kimi who can pull off a think like that.”

“Kimi is really hot stuff on the driver market. There’s no point in denying that,” Robertson assures Turun Sanomat.

Open doors in every direction

Robertson took the ‘back seat’ in Kimi’s background forces after he had arranged Kimi a seat as Lotus team’s driver. At this stage the manager is however needed more.

“Kimi trusts in me with these matters and of course we do our everything to get him the best seat possible so he can drive for victories and the championships for as long as he wants to continue here,” says Robertson.

Räikkönen didn’t even care to hide that he was negotiating in different directions.

“Those negotiations are my job. We are open in every direction. Kimi doesn’t have a contract after this season, so of course I’m talking to different teams to see what they have to offer for next year.”

They have no schedule when to finalize the contract negotiations.

“We continue negotiating and I can’t say if it takes two or three weeks or more. It can take a long time when finaziling the contract.”

Is it absolutely sure that Räikkönen will drive F1 in 2014?

“To put it frankly I think it’s pretty much sure that Kimi will be in F1 next year also. I think that is the most important information for outsiders at the moment. When you drive like Kimi there is a demand and since Kimi enjoys driving at the moment and wants to continue in F1, demand and supply meet.”

“The break from F1 did really good to Kimi. He came back refreshed and filled with energy. He enjoys F1 totally flatout,” Robertson praises.

Räikkönen’s passion is winning. How big is this factor when having the chance to drive in next season’s best car?

“Of course an opportunity like that is always a big factor. We all know that in order to win races you need a seat in certain teams. Kimi has won races with Lotus and this team is one option. They want to continue with Kimi really much,” said Robertson.

Change of regulations is under control

We are in for one of the biggest change of regulations in F1-history. What does it mean for Räikkönen?

“When you think back at Kimi’s comeback after being away for two years, they suspected that it was a big risk to take him since tires and cars have changed so much during that time. Then right in the first test after 20-30 laps Kimi assured me that everything felt immediately quite normal. Kimi has a natural talent to quickly adapt to everything related to the car.”

Romain Grosjean has benefitted from the setup-improvements thanks to Räikkönen’s feelings, and I’m sure that this talent won’t at least hinder Sebastian Vettel in Red Bull.

“Kimi is one of the most experienced drivers in the serie. All engineers from teams where Kimi has raced in have praised the accuracy of his feedback. Nobody is perfect, but I believe that it won’t take long for Kimi to adjust to next year’s novelties,” Robertson thinks.