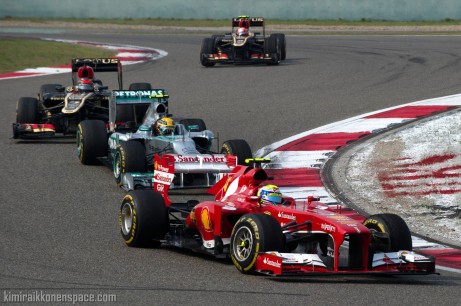 Fernando Alonso gave Ferrari its first victory of the 2013 Formula 1 season as his tactic of starting on soft tyres proved the right one in a strategy-defined Chinese Grand Prix.

Kimi Raikkonen and Lewis Hamilton used the same strategy to fill the podium, as Sebastian Vettel’s tactics could only give him fourth place, just inches behind Hamilton in a thrilling finish.

@PeterDWindsor
And as for that Finnish guy who was as quick in a damaged E21 as he was in a clean one: just superb.

@EvenstarSaima
Kimi: “For sure without the damage we could have been faster but good points. Pretty okay result. Good points and we try to do better next time.”

@f1zone
All 8 drivers under DRS investigation summoned to the stewards at 18:15 local time

@SkySportsF1
Official confirmation: no further action for all drivers alleged to have used DRS under yellow flags

No penalties over DRS transgressions

Lotus sure it can keep up in title race

“I got a better run out of corner three and thought he would leave me enough space but he pushed me off the circuit. I tried to avoid him but then was on the grass and kerb. The kerb saved me as I had grip. I couldn’t slow down and hit him in the rear. I don’t know if he could see me or how it happened, but there was no way for me to avoid it anymore as I was there next to him and ran out of road.”

“I wanted to change it,” he admitted. “I think they looked at the wing at the first pitstop and probably thought it would take too long. I don’t know. The car was still OK.”

“I was surprised there was not much damage as I hit him quite hard. I was also a bit surprised that we didn’t have more problems, just a bit too much understeer and destroying front tyres because of that.”

Kimi Raikkonen – 2nd: “Second wasn’t quite what we wanted, but in the circumstances it was the best that we could manage today. I’m not 100% happy because we didn’t win, but it is what it is and second place is a good result after a bad start and the incident with Sergio [Perez]. It was quite difficult out there; obviously the car is not designed like that otherwise we would use it all the time, but I was surprised how good it was still. Of course there were some handling issues which was not ideal, but we just had to try to live with it and we still had pretty okay speed.”

Romain Grosjean – 9th: “It was a long, tough race and again we not able to make it work quite as well as we wanted. I’m definitely not happy with ninth place; we started P6 and thought we had a good chance to end up within the top five, but unfortunately we could not manage it. I did as much as I could, but I couldn’t get the performance I wanted and being in traffic of course affects this. It was good to score some points for the team, but I want more in Bahrain for sure.”

Eric Boullier, Team Principal: “It’s a good result for the team today. Kimi showed once more why he’s one of the very best drivers in the world by being one of the fastest on track despite sustaining damage to his car. As a team we were able to give him a good strategy allowing us to beat Lewis [Hamilton] and Mercedes in a close battle. Romain had a more difficult day, but he scored points in another race which is positive and we feel he’s reached a turning point now where things will start coming together. Without the poor start and without the incident for Kimi then we definitely would have fought for a win today.”

Alan Permane, Trackside Operations Director (full interview): “It was an eventful race and good fun too. We had an interesting start with Kimi dropping back, but once we got onto the prime tyres things went pretty smoothly. There was no way we could get past Lewis on track; even though we had very similar pace and were even perhaps quicker than him. This meant we had to achieve it during the pit stops which worked perfectly. Kimi lost quite a bit of downforce with his front wing damage, otherwise he should have been able to challenge Fernando [Alonso] for the lead. We lost around 0.25 seconds per lap due to the damage to Kimi’s car. It was a more difficult day for Romain who was struggling a little bit with his tyres, but overall for the team we had both cars in the points which is great.”