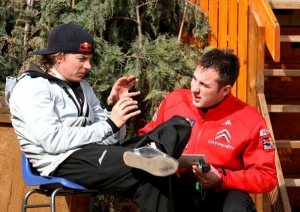 Former F1 World Champion Kimi Raikkonen has got
back into a rally car for the first time since crashing out of the Rally
Mexico just over two weeks ago.

Raikkonen completed two days of gravel testing in the south of France
earlier this week with his Citroen C4 WRC, in preparation for the Jordan
Rally from April 1-3. The Finn concentrated on accumulating more
mileage in the car – which he has been desperately short of this year –
and evaluating set-ups for the forthcoming gravel rallies.

The 30-year-old managed to get in two full days of running and reported
no major problems with his back, which had forced him to cancel the
pre-Mexico test. The Finn will now be well prepared as he flies out to
Jordan this weekend, which he believes will be a positive event for him.

“It’s completely new to me, but it should be a lot of fun. Again, we’re facing a different type of gravel so it’s hard to know
exactly what to expect, but the team has some information from the past,
so that will definitely help. We’re getting there; it’s just a question
of time.”

Raikkonen eager to finish in Jordan
Source: Autosport.com
Citroen Junior Team driver Kimi Raikkonen has admitted his priority
is a finish on next week’s Jordan Rally.

The Finn has not finished either of the first two rounds of this
year’s World Rally Championship without using superally, with a day one
crash on the Rally of Mexico earlier this month ending his participation
in Leon after seven stages.

Since Mexico, Raikkonen has completed a two-day test in the south of
France running without any problems from either his Citroen C4 WRC or
the back injury which had ruled him out of a pre-Rally Mexico test.

"I’m learning more with every kilometre. But what I
need most is more experience, and these test kilometers are allowing me
to go through the wide range of set-up options that the team has come
up with.

"I’m still lacking kilometres in rally conditions. On an event that
is as specialised as this one, it’s vital to cover all the stages. I
still need to get used to the Citroen C4 WRC on gravel and find a way of
driving that suits my style.

"We’re going to see what the gap is between myself and the
frontrunners at the start of the rally and then just try to reduce it
bit by bit."