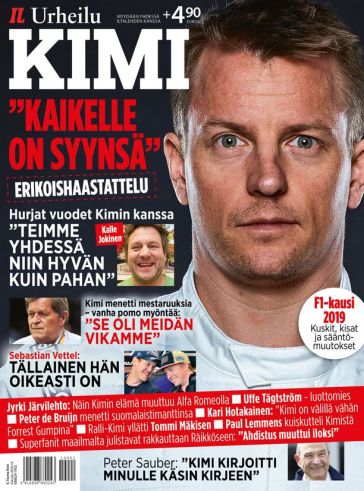 Earlier this year, Finnish news outlet Iltalehti* approached me for an interview to be part of a special edition Kimi Raikkonen career journal which was released in February. I was so honoured! They asked me to recommend any other hardcore fans I know to be part of this feature and so James and Lorenzo (whom I’ve met at the Italian GP in 2017) came to mind!

The magazine features great interviews with friends of Kimi, F1 team and media figures, as well as a nice 2019 season preview into what is probably also his final F1 career stage – returning to Sauber aka Alfa Romeo Racing. The journalist kindly sent me a copy of the magazine when it was finished and although it is all in Finnish and I can’t read it, it is such a special tribute to the Iceman and a joy to have in my possession, let alone to be part of! Thank you Iltalehti and thank you Kimi.

*Iltalehti is the third largest Finnish daily newspaper with a large sports department. The circulation on weekdays is over 90 000 and approximately 110 000 on weekends. On our website we have around two million (40 per cent of Finnish population) different visitors every week – more than any other Finnish sports site.

Here is a translation of the fan feature kindly provided by Nicole Damén:

HE IS OUR KIMI!

What is so alluring with the Iceman? Three superfans from around the world enlighted the reason for Kimi’s popularity.

Kimi Räikkönen is one of the most popular drivers in Formula One. Many of his fans have followed Kimi from the very beginning.

– His first podium in 2002 was the moment when I started to like this guy, who oozed silent self-confidence and was different from everybody else.

Irish James O’Connor followed intensively Mika Häkkinen, and after Mika retired it was easy to jump in Kimi’s sled.

– Both of them do their talking on the track, which is why I chose Kimi as my favorite.

Italian Lorenzo Valerin got assured of Kimi’s skills during season 2003, when Kimi fought for the WDC to the end. It didn’t even matter, that his opponent was Michael Schumacher.

– Kimi fought for the WDC with a one year old car. That was surprising to me, because it was only his third season.

The trio want to especially bring forth Kimi’s personality.

– After success and disappointment Kimi has still managed to stay honest to himself and his values, despite all the pressure that comes with the sport. He is master of himself, Azam said.

– He doesn’t do politics and he always says exactly what he is thinking. Success has not gone to his head, O’Connor complements.

– Räikkönen has unique traits, which are impossible to find from others I have always liked people who go straight to the point and Kimi is able to do that, maybe better than anyone else, Valerin says.

Azam and O’Connor have often complained, that sometimes Kimi’s personality turns against himself.

– Sometimes I have been frustrated, because he hasn’t defended himself at certain times when he was in Ferrari. The talks about his lack of motivation started in 2008, and I thought it was really unfair against Kimi, O’Connor said.

– His return to Ferrari was conflicting. Although I understood and respected his decision, I was strongly against it. Because of the way they treated him after 2007. I would never had gone back, Azam says.

– Sometimes I get the feeling, that it was because of money since Lotus didn’t pay his salary. Yet it was frustrating that he chose Ferrari, where he was treated unfairly. It felt like he had been blinded by his love for Ferrari, because of the WDC he won with them.

Both Azam and Valerin have met Kimi during the years. Azam met Kimi for the first time ten years ago, but she didn’t have the courage to walk up to him.

– I observed him from afar, out of respect. In 2015 I met Kimi face to face in Abu Dhabi. We exchanged words and I got his picture.

– In Italy GP 2017 I saw him from afar, but I wanted to wish him all the best and thank him, because he had helped me when I was sad. Kimi is in his own way my hero: a motivating and inspiring human being.

The meeting in Abu Dhabi was a memorable experience, especially since Kimi was exactly how Azam had imagined him.

– I appreciated how he took me into consideration when I said I loved him. “Yea? Really? he said in a very respecting manner, with a smile.

Valerin has met Kimi several times during Italy GP. He has often been outside Kimi’s hotel to get his autograph.

– Can you imagine a 20-year old guy hoping to get an autograph? That was me. He stopped and of course I didn’¨t know what to do.

– I have met him every year in the same spot, so perhaps he remembers me. At best our convesation was me wishing him good luck and him saying “thank you”.

A few years ago Valerin got into a group photo with Kimi in Milan’s Ferrari-shop.

O’Connor has made many sacrifices:

– Lack of sleep is one. No matter when F1-races or rallies start, I wake up at crazy hours to watch and cheer for Kimi.

– If I would be invited to a party at the same time Kimi races, then I would choose Kimi’s race.

Valerin has sacrificed a lot of money and energy during the years, just to be at places where Kimi walks by.

– Maybe I have lost something else, but seeing and meeting your sport idol is something, that makes it worth it.

Azam tells, that it used to be a full day’s job to keep up her Kimi-website, a job she does for free. The website has news, statistics, photos and videos from Kimi’s career.

– I use a lot of time to keep up the website, but the community and friends I met on the website are invaluable.

– Because of Kimi I have missed moments with friends, jobs, and family gatherings. They are not sacrifices in a way, because following Kimi has shifted my focus from different problems. It has been some kind of a survival mechanism.

Kimi’s two year contract with Alfa Romeo awakens enthusiastic anticipation. At the same time it may be the last time Kimi races.

– I have even been distressed about it. He has been a part of my life for such a long time, that it will be really bizarre when it ends. I will miss him greatly. F1 will also miss this unique ingredient, also called Iceman. There is nobody like him, Azam said.

O’Connor admits a certain nostalgia, but wants to remind how many great memories these years have brought.

– We can cherish them for the rest of our life. When Kimi quits there won’t be guys like him in F1, guys who don’t do politics or other crap. The sport will lose a huge amount of followers when Kimi quits.

Valerin believes he is in the last category.

– I won’t probably be as supportive to any other driver than Kimi.

The trio speculations about Kimi’s future after F1 are differing.

– It would be great to see him race in endurance races, but he will probably drive rally again. Or maybe he becomes a commentator like James Hunt. I know he wouldn’t do that, but Kimi is full of surprises! Azam says.

– I would like to see him as Ferrari’s ambassador all over the world. It would however require constant travelling, so maybe Kimi is of a different opinion than me, Valeri says.

– For me it’s most important that Kimi, his wife and his children stay healthy and live a happy life for many years. I hope, that he has a long and awesome life together with them, O’Connor says.