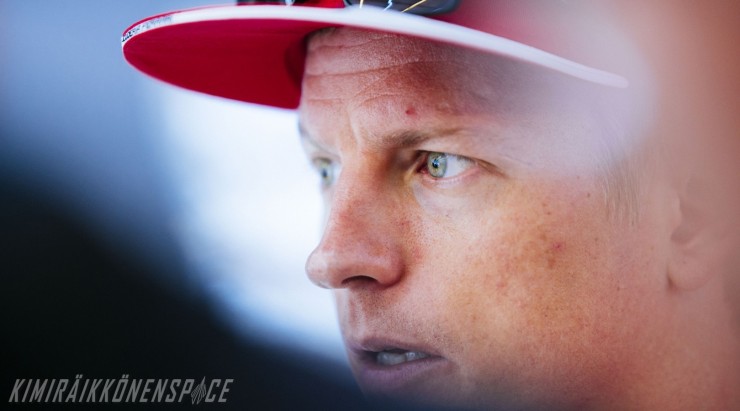 Kimi speaking in Spielberg today: “This track has a different layout from the last one we raced on in Montreal, and the conditions are different; tomorrow we’ll be on track and see where we are. The weather, as we saw in the last race, can play a big role if the conditions keep changing is not ideal and it can limit our running, but let’s wait and see. The result we had in Canada was not a disaster, but obviously we want to do better; the upgraded engine worked as we expected but, as package goes, we are still lacking the speed needed to compete with the Mercedes. Overall we have improved a lot from last year and even during this year, but the other teams are also improving. We know where we want to be, the team is going in the right direction but we know that we cannot change things from one day to the other. So we keep doing our best.” [via ferrari.com]

Kimi Raikkonen has admitted that it is Ferrari or nothing for him in Formula 1 next year, as he hit out at reports he will have to take a pay cut to stay in 2016.

The Finn’s current contract with the Maranello team runs out at the end of this year, but Ferrari has an option to extend it if it wishes to.

Raikkonen has said that he has not yet had any indication from Ferrari management about its intentions, but says that he is far from concerned about the situation.

“They have a contract, they have to sign it and it is as simple as that,” said Raikkonen in Austria. “It is not my decision and you have to ask the team.

“I always said it is not the end of my life if I don’t race next year but obviously I want to be here.

“I think the team is definitely going in the right direction, and I am sure in the future we can really be the team to beat. We have to still work though to improve things.”

Raikkonen was upset, however, at suggestions that emerged in the Italian media claiming that he would have to accept a pay cut if he was to get a fresh deal.

“I would be interested to know who wrote it,” said Raikkonen. “First of all they have no idea what my contract says, they never will have.

“It is bullshit who says that. Just keeping writing that. You have no idea what my contract says.”

Raikkonen even confronted the journalist who wrote the story suggesting the pay cut.

“So you just come up with bullshit that has nothing to do….yes or no?” asked Raikkonen. “You don’t see the contract but you write stuff?

“So you write stuff that is not true…. We will see. Maybe you should start writing some things that make sense.”

After admonishing the press, Raikkonen finished with: “Write what you want, I don’t really care.” [via motorsport.com | autosport.com]

Kimi Raikkonen believes Ferrari can avoid a repeat of the problem that caused him to spin in the Canadian Grand Prix, even though Formula 1’s rules limit the team’s options.

The 2007 world champion spun on an out-lap after a pitstop at the Montreal hairpin in the Canadian GP, when he was caught out by the engine settings his car was still running as a result of his stop.

While Raikkonen believes he and Ferrari can now make allowances for what happened in Canada, the FIA’s rules on how engine settings can be changed after a car makes a launch (at the start or after a pitstop) means there is always a risk of something similar happening again.

“It was a freak accident, but that’s part of the game, and I’m sure we can avoid it,” Raikkonen said in the Red Bull Ring paddock on Thursday.

“There are some rules when you do starts, and after the pitstops, there’s an FIA lockout that lasts a certain time.

“It doesn’t matter when you switch [the engine mode] off it still takes 90 seconds – it’s a normal thing on a race weekend.

“You cannot change that, but we have settings we can work on, and knowing what can happen we can try to avoid it.

“We know what caused it and we will do the best we can to minimise that risk.

“The rules limit what you can do, but we know certain corners, at certain circuits, there might be a chance [of a repeat], so we know to do it differently.”

Raikkonen added the Montreal spin was the first time he had suffered the problem with the 2015 Ferrari.

“It hasn’t happened at all this year – never in testing or practice – the first time it happened was in the race,” he said.

“Unfortunately on that circuit in those conditions it happened, and I spun because of it.” [via autosport.com]

Raikkonen on Hulkenberg’s Le Mans win: “Someone just asked me so I guess he won… it’s good for him”