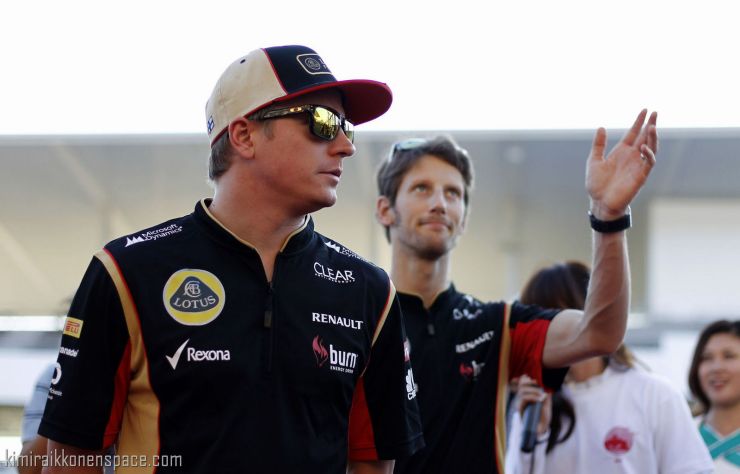 Lotus team principal Eric Boullier is delighted with Grosjean’s drive at Japan and said: ‘He did a great job. He is at the level we expected, what we have wanted him to do.

‘We wanted him to establish himself as a driver like he is now, and on top of that, since Kimi announced he was leaving, it has been up to him to step up, and he has done that.’

Lotus and Grosjean are expected to agree to the option before the deadline at the end of the month and Boullier added: ‘I need to get written confirmation from my board.

‘Romain has a contract with us for next year. He has an option to be taken up, and we have to do that in a few days, so we will see.’

Lotus’ head of trackside operations Alan Permane reckons that the front end characteristics of the 2012 Pirelli construction used since Budapest do not suit Raikkonen’s style.

“He doesn’t like the front end,” Permane said. “He doesn’t like the turn in. It is not sharp enough for him. But, if you try to sharpen it up too much, you then lose the rear. It has just unsettled him a little bit. But he is getting to grips with it. There is no stopping Romain at the moment, that is for sure.”

Permane believes the gap between Grosjean and Raikkonen has been exacerbated by the fact the grid is so close now, meaning small differences in qualifying can make a big difference in terms of starting positions.

“In race mode, Kimi is fine with the tyres. He qualified 13th in Singapore and ninth in Korea and got two podiums. But that won’t happen every week. You cannot rely on the safety car to deliver strong races from back there. You have to qualify better and that is what he is struggling with. It was better here. He was three tenths from Romain in Japan, but three tenths was five grid slots. It was that close. Normally that might have been two or three positions.”

It’s not the first time Permane has spoken disrespectfully of Kimi:

“We’ve never been so annoyed to get a podium,” Permane said, referring to the fact Kimi Raikkonen benefited from Grosjean’s misfortune to take third spot.

And it’s no surprise here after Korea and Japan that in order to build up Grosjean’s status the team feel the need to make poor remarks about Raikkonen.

Boullier implies Raikkonen a nobody without Lotus

Team boss Eric Boullier says it is “likely” Kimi Raikkonen is departing Lotus as the highest paid driver in Formula One (list of salaries here).

When the Finn returned to the sport last year after a rally and Nascar sabbatical, his contract included a base retainer and big bonuses for points.

The deal caught Lotus by surprise.

Now, after Raikkonen said he is leaving for Ferrari next year only because his pay is late, the 33-year-old’s dream pairing with Lotus is ending somewhat sourly.

Asked by Speed Week to say what the 2007 world champion brought to the team, boss Boullier answered: “That is difficult to define.

“Without us, Kimi’s return to F1 would have been a different picture,” he said.

“Can you imagine how it would have been if he had signed for Williams and not us? We built everything around Kimi.

“I think as a Lotus driver he became even more interesting to the fans. He gained in popularity,” said the Frenchman.

“If he had retired after his rally phase, I think Kimi Raikkonen would be forgotten today,” added Boullier.

“We gave him the right tools to get his self-confidence back.”

Told of the rumour that Raikkonen is the highest paid driver in 2013, Boullier smiled before answering: “That is quite likely.”

Kimi Räikkönen schooled his teammate Grosjean in Korea with a rude overtaking.

No handshakes, no exchange of words whatsoever. Kimi’s and Romain’s relationship has never before been as cold as it was after Korean GP.

Räikkönen avoided all eye-contact with Grosjean, who at least glanced at Kimi a couple times.

Räikkönen schooled his younger and less experienced teammate. Grosjean started 3rd and Räikkönen 9th, yet Räikkönen crossed the finish line ahead of Grosjean.

Their fight escalated 17 laps before the finish after the Safety Car left the track. Räikkönen overtook Grosjean with more worn tires.

Grosjean’s dangerous attempt to block did not please Räikkönen. A crash was not far away.

“He moved a couple of times to the left. It was a pretty tough situation,” Räikkönen said. “Before that he made a mistake in the second last corner and I got a good opportunity. I heard that there would be yellow flags on the straight, so I knew he couldn’t get past me with DRS. I decided to overtake him and it wasn’t difficult.”

Grosjean said: “For Kimi’s fortune and for my misfortune the Safety Car came to the track. I made a small mistake and Kimi went past me. Then on the next straight I couldn’t use DRS to get past him because of the yellow flags. However I was faster than he was.”

I have only once heard Kimi Raikkonen speaking Italian. That happened back in January 2007 at Kimi’s first ever public appereance as a Ferrari driver in Madonna di Campiglio.

Kimi entered the media meeting alongside with former Ferrari press chief Luca Colajanni, sat down behind the large table, took the microphone and said: ’’Buongiorno a tutti.’’

After that ice-breaking gesture Kimi changed to English and cleared well the interview hour with the Italian press, as well.

I have been around with Signor Raikkonen since the very beginning of this F1 career. He has never been that talkative in any language, but to speak Italian publicly – no way.

’’I can say few words more in Italian, I did learn some while I spent three years with them, but – like at school, I’m too lazy to try to learn more than I need to get along with people I work with’’, Raikkonen confessed me once.

’’I have not been hired to Ferrari to speak Italian, I am hired to go fast with their racing car.’’ Kimi’s close friend, the Ferrari WEC-driver, Toni Vilander speaks Italian fluently. He could teach his pal, but the pal rather listens while Toni clears up things in Italian, when needed.

The same goes in Switzerland, too. Raikkonen has lived in the Zurich area now for 13 years, but he does not speak German – or does not want to speak the language. Even going shopping he handles things in English, or speaking with hands, more often.

’’Money talks’’, Kimi smiles, while explaining his way to buy food in his home town of Baar.

8 thoughts on “Kimi to Ferrari and Grosjean suddenly Lotus No.1 Driver”