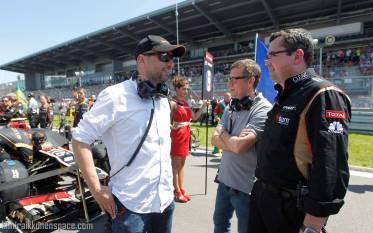 Lotus owner Gerard Lopez feels he has to prove to Kimi Raikkonen the team is perfect for him as a racer and not just as a human being. Raikkonen’s future has become a hot topic of conversation in Formula One, with the Finn seemingly involved in a tug of war between Lotus and Red Bull.

The Milton Keynes-based marque are currently mulling over who should replace Mark Webber when he retires from the sport at the end of the season. Red Bull owner Dietrich Mateschitz and team principal Christian Horner have both made it clear Raikkonen is on their radar, with Toro Rosso duo Daniel Ricciardo and Jean-Eric Vergne also in the running.

The smart money is on Raikkonen, with three-times champion Sebastian Vettel yesterday stating after his victory in the German Grand Prix he would be excited by the prospect of working with the 33-year-old, who finished just a second adrift at the Nurburgring.

Whilst Raikkonen is happy with his working environment at Lotus, as the team has gone out of its way to ensure promotional and media activity is kept to a bare minimum given his dislike of that side of F1, providing a winning car is another matter.

“He knows he is being treated well here, as well as we would treat any other driver, and that’s a big difference, whether it’s here or somewhere else,” said Lopez.

“This team has a culture which is quite human and it works well, it does things right, and it’s a culture Kimi likes.

“If we imposed huge time constraints on him then he wouldn’t enjoy it, as he hasn’t at other teams before.

“He has to decide, and I think he will stay.

Asked to rate his chances of keeping Raikkonen, Lopez said: “I would say high because we know him well.”

Horner has previously stated he would like to resolve the matter by the end of F1’s summer break next month.

Lopez, however, knows Raikkonen won’t be pushed, adding: “If I know Kimi He will want to leave it as long as possible.

“Right now Kimi hasn’t made a decision yet. He’s waiting to get all the information to make the right decision.

“You can’t rush Kimi into anything, not if you are us, not anybody.”

“We know him well, we know he likes it here,” explained Lopez.

“It is up to us to prove that he can get the package that he wants as a driver, and I think he will stay.”

Lopez also dismissed suggestions that Lotus cannot keep up in the F1 development race, and that the team is held back by a lack of funding.

“We developed the car to the point last year that the delta between us and Red Bull was the same in the second race as it was in the last two races,” he said. “So I don’t think that is much of an issue.

“People also keep talking about budgets. Although we have a lower budget than some other teams we do quite well with that budget.”

“The safety car did not help on this. We had to rebuild the strategy a little bit after the safety car. Also remember after the first pitstop, when Kimi was struck behind [Lewis] Hamilton, we lost three or four seconds and that cost us a lot.”

Boullier said that the team’s afternoon was further compounded by radio communication problems with Raikkonen. The Finn could hear what the team was saying but his feedback was not being picked up by his team in certain areas of the track. This left the team unsure about the exact state of Raikkonen’s tyres, and whether or not it was risking a repeat of the 2012 Chinese GP when the Finn slumped down the order in the closing stages.

“We lost radio with Kimi at the beginning of the race,” Boullier said. “It didn’t put us in a comfortable position [near the end], and we all remember very well Shanghai in 2012.

“We could see his pace was dropping a little bit and we had the space to stop, so we did it. Both cars were then on different tyres and we could see easily that Kimi was picking up the pace, although not as much as we expected on the tyres. We could see the new option was working better than the scrubbed, and it seems it was the right decision to allow to Kimi to try to catch up with Sebastian.”

Lap 55 the same order was repeated for the 3rd time
Lotus: “Kimi is behind you on soft tires and he is very fast. Don’t hold him up.”
RG: “can you confirm to me if Kimi is faster?”
Lotus: “Yes, confirmed, yes.”

After this RG let Kimi past.

4 thoughts on “Lopez: You can’t rush Kimi into anything”