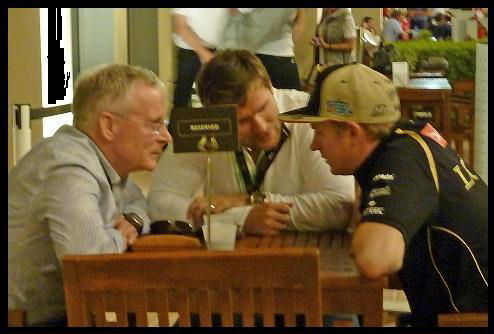 Kimi Räikkönen, who already is one of the old F1-foxes, treasured once again his reputation as the world’s coolest driver and belittled the significance of his victory just as skillfully as he got it.When peeking under the surface the situation was completely different. This victory got Kimi’s heart to smile just as joyfully as his last victory in Belgian Grand Prix 2009 did.“This doesn’t change other things terribly. I’m just happy for the team. For them it’s probably a more important thing than for me. This has been a tough season and now the team and management will surely get more faith in their own doing, in what we need to be even better in next year.”“I don’t have the need to jump up and down out of joy. Maybe this will silence the doubters at least and at least the questions whether I’m still capable of winning will stop.”Steve and David Robertson, who still take care of Räikkönen’s contract matters, they know their protegé so well that they also know that the significance of the victory was unbelieavably big for the driver also.“When we heard David Coulthard ask Kimi on the podium what the victory means to him it made us laugh when he claimed that it didn’t mean a thing. We know Kimi’s thoughts and I can assure you that he got a lot more inner joy from this victory compared to his other victories,” Steve Robertson told Turun Sanomat.“Kimi values this victory really highly, since he knows that he has now proved to the doubters that he is still the same fast and flawless top driver that he was in the beginning of his career.”“There is a lot similar to Spa 2009, which he values as his career’s best victory.”“As a bystander I put these two races on the same level. Both were so important to Kimi for his own reasons. Kimi showed what he can do with a car that isn’t one of the fastest ones. These victories came only due to the driver’s performance. He made the car do the laptimes needed for a victory.”“Spa 2009 and now Abu Dhabi 2012 are Kimi’s ways to complete a season, since winning with that moment’s car requires one hell of a drive and Kimi did it on both occasions. Two years away from F1 didn’t affect him in any way, “Robertson praises.Did you believe that Kimi would win this season?“It could have been possible already in Barcelona or Hungary, but when looking at the last 2-3 races I can honestly say that I didn’t expect it anymore because the car didn’t seem to have enough performance ability.”“But Kimi proved again in this race why he is a world champion. Just like he said in the radio to his engineers: I know what I’m doing, leave me alone.”“Kimi is a real professional. He didn’t take one wrong step the whole weekend. On that track there is no one more dangerous than Fernando Alonso chasing you. That’s when the pressure piles up – well, Kimi isn’t called the Iceman for no reason. Kimi has always been phenomenal when everything falls in place during the weekend.”Robertson reminded that the difference of feelings in Abu Dhabi GP three years ago were like from another world.“Back then Kimi came far from behind to 12th position. Had someone claimed that he will return three years later and win the whole race, would anyone had taken it seriously? We didn’t take it seriously. This is a really big thing for the team. The atmosphere is practically electric,” Robertson said.